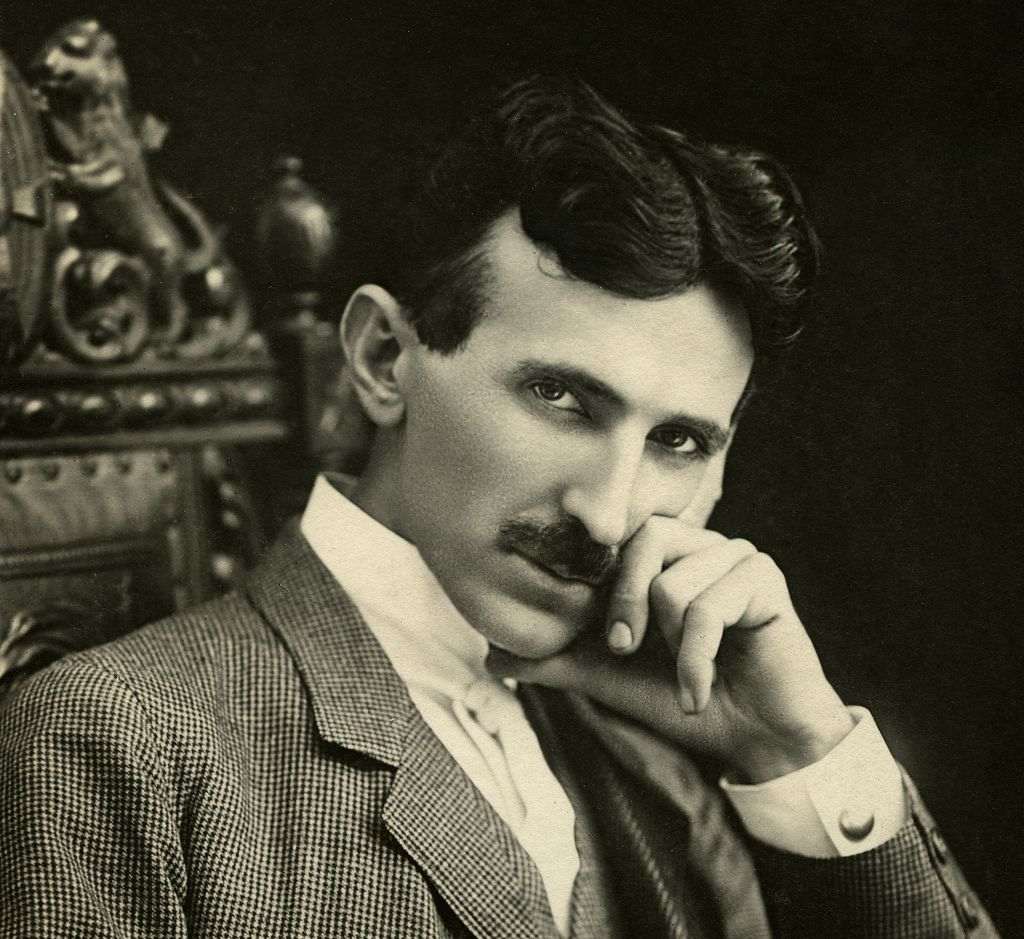 24.09.2021 – 15.15 – The story of Nikola Tesla lies at the intersection of science and popular culture, and is a paradigmatic example of a biography that is as interesting to the scholar as it is to the average person.
There is the real Tesla, a flesh-and-blood man aware of his limitations; and there is the legend, the visionary Tesla whose philosophy continues to fascinate popular culture.
The triumphal positivism of the late nineteenth and early twentieth centuries was fuelled by a cult of the now vanished man-scientist and mythologized him. There were also those who, like their rival Edison, actively pursued this image of a new Prometheus, hiding the human and social costs behind the hiss of electric wires. In both cases, the aim was to transfer scientific discoveries to industry and technology, and the associated “consumerist” applications in mass society.

Today, the path taken by nineteenth-century scientists continues in this dichotomy, seeking in scientific innovation the engine of economic redemption. The progress of science, however, makes the figure of the ‘demiurge’ scientist that characterised Tesla’s character impossible. Even a lone genius like Tesla could not cope with the mass of variation and data that today requires entire multidisciplinary teams. The individual has become a collective, and research has lost the imprint of the histrionic personality.

His birth on the frontier and his first experiments

The epidemic waves associated with the Ottoman Empire raids and invasions forced Austria, from 1770 onwards, to set up a gigantic cordon sanitaire for the purpose of health and political quarantine: a corridor running through the Balkans from the Adriatic coast to the mountains of Transylvania, populated by colonial soldiers whose job it was to guard an unstable frontier and combat both disease and enemy incursions.
It was in this frontier region, a stone’s throw from the civilization of Vienna, but at the same time ‘Americanly’ wild, that Nikola Tesla was born: it was the night of July 9-10, 1856.

On a border strip that was both part of Austrian Empire and not, Tesla was born into a family from Smiljan (Lika) whose ancestors had served in the Austrian army and whose father was a proud Serbian Orthodox priest.
In the fall of 1875, Nikola Tesla enrolled at Graz Polytechnic, and it was at a lecture given by one of the professors that he sketched out his dream of an alternating current motor without switches, which showed that although the idea lacked technical means and a scientifically sound theory, it was already there. In terms of historical synchronicity, it is interesting to note that in 1875 Croatian Anthony Francis Lucas, who like Tesla was to find his fortune in America by inventing the “modern” oil well, was studying at the same polytechnic.

After a time in Prague, Tesla moved to Budapest (1882) where he met Tivadar Puskas, a close associate of Thomas Edison, and it was in Budapest that he invented his first invention, a telephone amplifier.
Like a new Archimedes, Tesla conceived from a simple drawing in the sand of a city park the basic principle of generating an alternating current magnetic field from which he would derive the induction motor that would transmit the power of the alternating currents.
Tesla was able to present working models of induction motors by the following year, but the Old Continent looked on with disinterest at the modern devilry; like others before him, Tesla therefore made his way to the United States, whose history seemed open to scientific innovation ever since the capture of the lightning bolt by the founding father Benjamin Franklin.

Arrival in America and the ‘great disillusionment’ with Edison.

A suit, a few coins in his trousers, drawings and poems. Nikola Tesla did not have much else with him when he stepped ashore from the ship City of Richmond. But he did have a letter, written by his superior in Europe and Edison’s friend, Charles Batchelor. A few words, but significant: “I know two great men. One is you, and the other is this young man who stands before you.”
The love for Edison soon turned into a heated rivalry when, after a year in the American inventor’s service, Tesla realized that the latter had no intention of exploiting his genius. The rivalry soon developed into the famous “War of the Currents,” pitting Tesla’s high-voltage alternating current, backed by the industrialist George Westinghouse, against Edison’s direct current. The conflict was political and economic, since it was about securing a monopoly on electric lighting in the United States; but it was also personal, since Edison was a self-made scientist who knew entrepreneurship and trade wars, while Tesla, on the other hand, had acquired in-depth knowledge of physics and mathematics in Europe that made a long-term vision possible.

It was thanks to Westinghouse, whose name lives on today in connection with nuclear reactors, that Tesla was able to continue his experiments. Unlike the “magician of Menlo Park”, George Westinghouse was “in my opinion the only man on the planet who was able to realize my alternating current system under such conditions and win the battle against prejudice and the power of money”, Tesla wrote in his 1915 autobiography.
“He was one of the last true gentlemen of whom America should be proud and to whom mankind owes an infinite debt.

The War of the Currents

It was in this context that Tesla developed his induction motor and polyphase system, protected by 36 patents filed in the United States. Among them, the Electric Power Transmission, by which Tesla protected his method of energy transmission with motors based on the principle of rotating magnetic field and realized by polyphase alternating current.
This introduced the second key invention of Tesla’s system, the Electromagnetic Motor, through which Tesla applied the discovery that the rotating magnetic field in turn generated currents capable of producing a magnetic field in the rotor. It was the activity of the two fields that produced the rotary motion that was ultimately responsible for the movement of the rotor.
In this sense, this motor, which is called “asynchronous” because of the difference between the rotational speeds of the rotating magnetic field and the rotor, is also called an “induction motor”. It is precisely because of the practical application of the principle of induction that Tesla was named the measure of magnetic induction in 1960 in the International System.

Despite some attempts to discredit polyphase alternating current by associating Westinghouse technology with electrocutions and the new electric chair, Edison lost the ‘war of currents’. The turning point came when Westinghouse won the competition to light the 1893 Chicago World’s Fair, also known as Columbian Fair, because it celebrated 400 years since Christopher Columbus arrived in the New World.

Tesla’s system proved powerful, safe and above all reliable, condemning Edison’s direct current to defeat. Eloquent testimony to this was Edison’s subsequent race to buy up nearly all the AC electrical systems in America, revealing a business spirit that made up for Tesla’s lack of concreteness.
A direct result of these crucial years was also the final formulation of the Tesla Coil, a special transformer capable of transmitting electricity by inducing high voltages and operating at high frequencies.
In parallel with the development of polyphase alternating current, Tesla also began to study electromagnetic waves as transmission signals, and in 1898 he presented the first device of its kind, a remote-controlled ship. Today, in combination with the system of four resonant circuits, it is considered one of the foundations of wireless communication.

After the bankruptcy of Westinghouse, Tesla moved to Colorado Springs, where the spacious facilities provided the necessary setting to continue his studies of high voltages and high frequencies within what Tesla called “wireless telegraphy.”
Here, within the walls of a lonely wooden laboratory, Tesla discovered the frequencies of the earth’s electrical resonance that produce static waves. For Tesla, this was a discovery that eclipsed all previous inventions: “I have discovered the philosopher’s stone I have so long sought,” he wrote to his financier John Pierpoint Morgan, “My discovery is so revolutionary that it will completely change social values and human relations.”
The natural outgrowth of these studies became Tesla’s so-called “million dollar folly”: the Wardenclyffe Tower, on Long Island in the heart of New York. This was a very powerful new transmitter, called Amplifier Transmitter. The goal, as Tesla himself told his financier Morgan, was “the wireless transmission of electrical energy over any distance.”

Tesla’s theory was that it would be possible to transmit energy between two electrical sources, provided the source was connected to an oscillator firmly anchored in the earth, capable of transmitting the oscillation into the earth’s crust. The vibration would then be received over the entire surface of the earth. In other words, the system worked by vibrations activated by the earth’s natural electrical charge. The tower had several functions; in addition to transmitting power on a small scale if a similar system existed in another country, Tesla also wanted to use it for transatlantic wireless telecommunications and radio communications. Today it is known that the Earth is electrically charged due to the interaction of the Earth’s magnetosphere with the solar wind, although the model of our planet remains inaccurate.

The construction of the tower, however, met with many obstacles, and after years of uninterrupted labour, the backers left Tesla one by one until the structure was abandoned. Having invested most of his resources in the project, Tesla also lost the proceeds of the patents for the radio (attributed to Marconi) and the induction motor, which had expired.

The ‘disappointment’ of his last years years.

The inventor suffered from an obsessive-compulsive disorder that was not recognised during his lifetime and whose ‘obsessions’ made it difficult for him to gain credibility in the eyes of financiers. As his condition worsened, his pronouncements to the press and the scientific world became increasingly implausible; the patents and projects from this period walk a fine line between science and fantasy. These included defensive weapons offered to the world’s governments, in which the Americans were particularly interested.
The classic example was the so-called “death ray”. It was during this phase – which not coincidentally coincided with the rise of science fiction in the 1920s and 1930s – that Tesla became the “mythical” figure who is now the subject of both academic narratives and conspiracy theories. The eccentric but respectable scientist had become the magician of electricity; the tragic biographical figure became a concentrate of the fears and hopes of entire generations. When he died in 1943, poor and abandoned, at Orthodox Christmas Day, the symbolic transition from reality to myth, from science to science fiction, had already taken place.

[The article is a review of the content of the exhibition “Nikola Tesla: a man from the future“, held in Trieste at Magazzino 26 at Porto Vecchio. Working models of the patents of the Serbian inventor, digital content, archival material, audio recordings and much more to discover the life of a man who forged the future of electricity.
The exhibition, directed and conceived by ACGS Serbian Youth Cultural Association, includes exhibits from the Nikola Tesla Museum in Belgrade and pays special attention to the origins of the inventor and the context in which his genius was born and matured.
The exhibition will be on view in Room 1B on the first floor of Warehouse 26 from September 18 to October 10, 2021, and is free of charge. Guided tours can be booked at: [email protected]]