Trieste as innovation-hub. The new Congress Centre is now reality 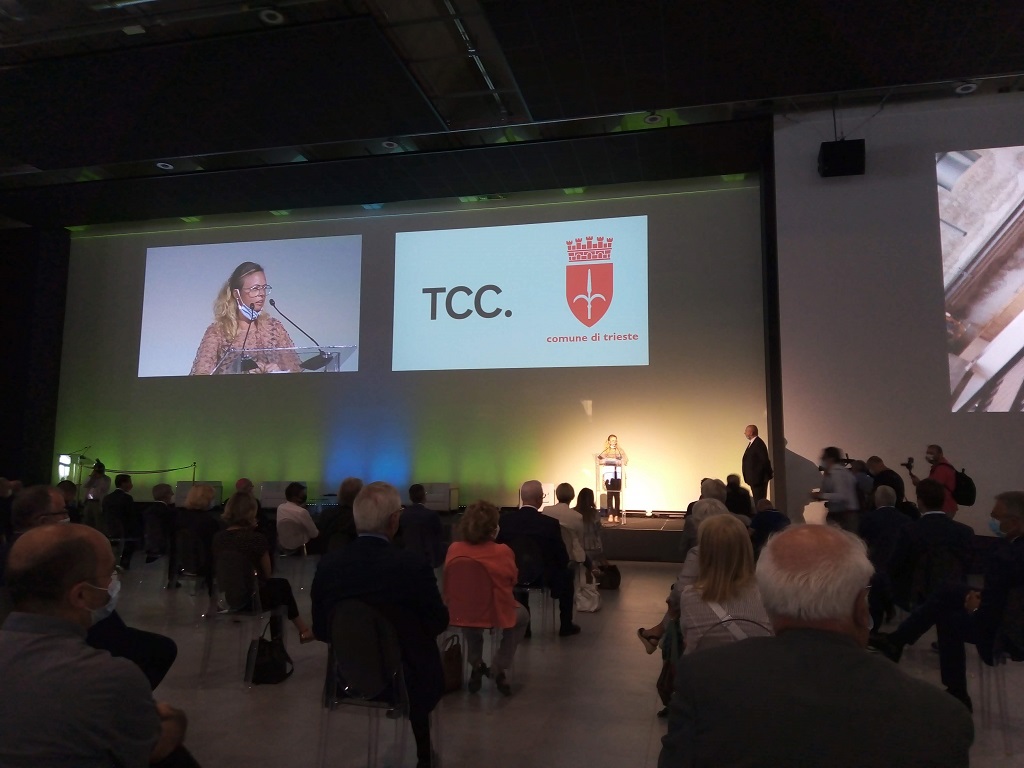 31.08.2020 – 09.30 – A lifting device wanders between Warehouse 27 and Warehouse 28, two workers carry a covering panel; inside the Congress Center the armchairs are removed from the packaging and while the presentation begins a group of workers works on one of the windows.
There is still a lot to do in the congress center inaugurated today in the Auditorium of Warehouse 28, a room that at its full capacity will accommodate up to 2,000 guests.
Having the ESOF2020 now at the doorstep, the City of Trieste works on the last touches of the future nucleus of scientific and congress tourism of the (former) free-trade zone.

Mayor Roberto Dipiazza took the floor, aknowledging everyone involved in the completion of the congress center, for which the city had 15 months to build it from scratch.
The mayor also mentioned the general redevelopment of the Porto Vecchio, especially with reference to the museum center, and “today – he began – it is a great day for Trieste. Here, a year ago, there was nothing.
I would like to remember how this adventure began,
in Toulouse, on 13th and 14th July 2018, with engineer Pierpaolo Ferrante.

And we wanted to dedicate this Auditorium to him, so that he can be remembered as the initiator of ESOF2020′′.
“The competition for Warehouse 26 was won by Consuegra, one of the greatest Spanish architects, who is working on an extraordinary project that includes a “mirador”, a viewpoint on the roof of the Warehouse. Consuegra will manage 33 of the 50 million received for the Old Port by the Ministry of Cultural Assets and Activities and Tourism. Then, within December-January, we will inaugurate the Sea Museum, the Warehouse 18 Museum with the exiles’ belongings and of course the Immaginario Scientifico, the latter in April 2021.

5 million Euros have been invested in the road network, another 10 million, again from the tranche of 50, are ready to connect Corso Cavour, Piazza della Libertà and the railway junction. But the most important thing is that we are in the finishing straight also for the Porto Vecchio Master Plan, thanks to which we will be able to proceed with the investors interested in it”.
“This area is a great opportunity for our city, but only if we work together: only then will this Congress Center become a formidable flywheel for Trieste“.

Elisa Lodi, Municipal Councillor for Public Works, on the other hand, emphasized the role of project finance in the construction of the Center: “It is an important day for our city, because it sees the creation of a Congress Center realized in record time in just 15 months, thanks to companies that have worked despite a health emergency that has made it very difficult to “operate” normally. A period of strong commitment also for public works, because as you may know this is a work realized thanks to the project finance, where private and public bodies have intertwined with each other. The Municipality has believed in it, especially from the economic point of view, financing the Center with 11 million euros and disposing another 5 million for the infrastructure in the Porto Vecchio“.

The Councillor for Economic Activities with proxy for ESOF Serena Tonel continued the speech mentioned by Lodi, highlighting what job opportunities will be offered by the Center: “Today we are not only inaugurating the Congress Center, but we are starting a new era. I am convinced that the Center is what this city needs: congress tourism, as well as the entire chain linked to congresses and exhibitions. A new engine, because it is the first big investment in Porto Vecchio. It is also an added value that has been realized with project financing, as well as the speed with which it was built. But it is also a new era for the way the city has managed to work together, pooling many public and private resources and in terms of expertise, skills and strategic vision for the future”.

“The Porto Vecchio thus wants to be the main engine of our city’s economy, especially for investment. We must believe in it, just as we have believed in this Congress Center. It is necessary to remember the emporial vocation that this city has always been able to cultivate and within this place, which we hope will be a precursor of many other settlements, it will be nice to make Trieste an emporium of innovation and technology”.
The President of Friuli Venezia Giulia Massimiliano Fedriga conducted a speech that has “detached itself” decisively from what was discussed by the representatives of the city, preferring to emphasize the “treasure trove” of scientific and technical bodies present in Friuli Venezia Giulia.

The focus was not on the “musealization” of the Porto Vecchio, but on its possible role as an “incubator” for start-ups and high-tech companies.
“I believe that through the development of the Porto Vecchio passes also the development of Friuli Venezia Giulia itself. We have throughout the Region great skills for research and innovation, which we must improve in the field of applied research. Especially in Trieste, basic research has great potential that will allow us to look to a not near future, but far future. We must also take advantage of these capabilities, favouring applied research that translates into job and development opportunities.
The area of Porto Vecchio could play this role: I see innovation, research and training”.

“With the new company, established with the Municipality of Trieste which is its majority shareholder and with the Port Authority, I think we should go in that direction. We in the Region believe in this area so much that we have started a dialogue with the Municipality to ensure that all the FVG Region offices in Trieste are transferred to a hub in Porto Vecchio. This means that the Region will put the funds for infrastructure. In fact, we believe that only looking to the future we can build the present.

And this can be done only with a concrete investment plan that we want to attract in this area. It is not true that “anyone” can come to Porto. We must develop a strategy to understand which companies create work and, therefore, development.
It is not enough to build houses, we need more. And this is the great challenge we are facing. And in this sense I fully agree with the Mayor and his attention to the word “together”. The relaunch of Porto Vecchio does not pass through one administration or another, but through a community that is that of Friuli Venezia Giulia and Trieste“.