Giorgi (ICTP): ‘Two thousand catastrophic events per year over the next two decades’ 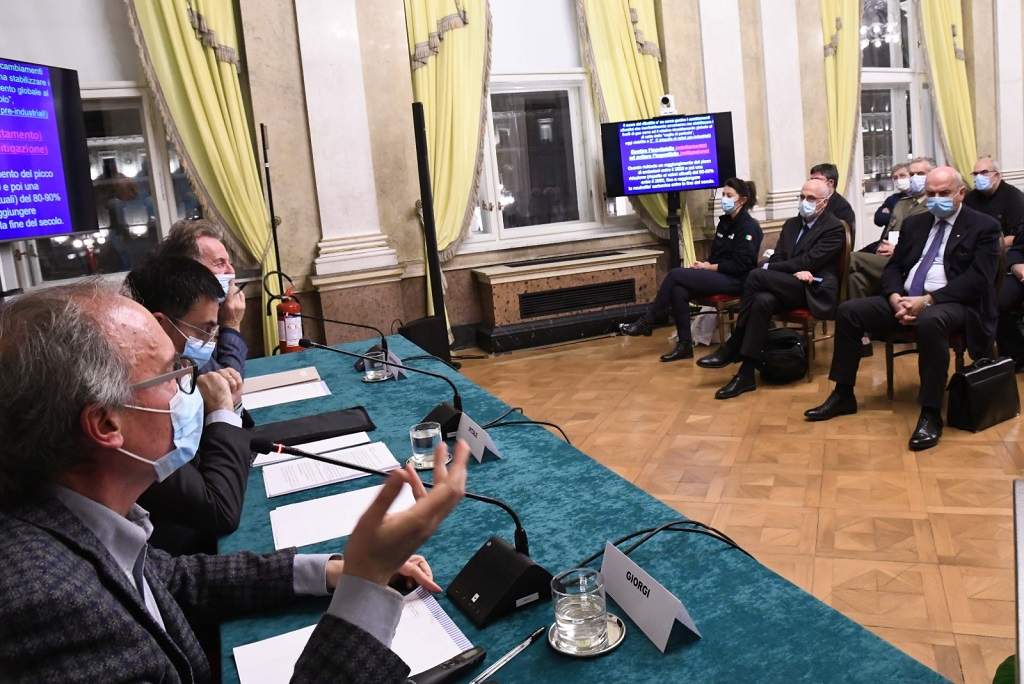 13.11.2021 – 09.40 – While COP26 is underway in Glasgow to find a solution to climate change, Trieste also had its own little COP26: a conference on the impact of climate change on our sea was held at the Palazzo della Regione, attended by Trieste’s scientific leaders, led by the OGS, and Nobel laureate Filippo Giorgi of the ICTP.
Even if the COP26 targets exceed the most optimistic expectations, there will be a rise in sea levels that will affect Trieste, especially in the lower city.

Fabio Scoccimarro, Councillor for the Environment pointedout that the region aims to reach the Green New Deal targets five years ahead of 2050, “leading the way in Europe”. However, Friuli Venezia Giulia has to admit that it is a region whose pollution (also) results from its location at the intersection of several regions and states, especially as far as water and air are concerned.

Moreover, Scoccimarro said, it is unlikely that the problem will be solved if “two of the biggest CO2 producers in the world”, namely “Russia and India“, are absent from COP26.
Finally, while admiring the activism of young people for the environment, Scoccimarro protested against its “instrumentalization“, referring to the case of the “Tagliamento“, where security measures will be necessary. Therefore, “environmental awareness with a human face” is needed, he said. In this context, Scoccimarro referred to the successful example of Ironworks and its measures to protect jobs. Dreams,” he concluded, “must be turned into reality.

Mayor Roberto Dipiazza also took the floor and, in a brief opening speech, recalled the work already mentioned on the occasion of the last Barcolana to prevent sewage from Trieste’s underground watercourses from being discharged into the sea. There is only one exception, and that is the Chiave torrent, which flows in the Porto Vecchio and will also soon be diverted.

Prof. Michele Pipan, representing the OGS, pointed out that climate change has “impacts on a fractal scale also on local contexts”, so it makes sense to talk with local authorities. The climate conference in Trieste involves, above all, the OGS, which remains one of the institutions with the “most favourable conditions for dealing with this issue”. After all, it is also the centenary of the Institute, which was founded in 1921.

The OGS was joined by Arpa FVG, whose president, Anna Lutman, spoke on behalf of the institute. She pointed out that Arpa, which was founded in 1999, continues to work to protect the sea and is expanding its activities into new areas such as noise at sea and the effects of pollutants.

Nobel Laureate Filippo Giorgi opened the conference, which featured some of the biggest names in ocean and climate change science in Trieste. Speakers included Andrea Cicognaof Arpa FVG, glaciologist Florence Colleoni and ecologist Cosimo Solidoro of OGS. The climatologist, head of the ICTP’s Earth Physics Department, recalled that the last two years have been an exceptional period in which catastrophic events related to the climate emergency have accumulated. In the case of Italy,  forexample, the Vaia storm (2018) and the melting of the glaciers of Mont Blanc (2019). All the indices linked to climate change have long confirmed an exponential increase: from carbon dioxide to catastrophic events.

‘Two thousand catastrophic events per year over the next two decades’ Giorgi said. And the indicators are ‘continuing to increase’ in some cases, much more than originally predicted. Italy itself ‘has warmed more than twice the world average’. Pollution is now ‘the third leading cause of death after cancer and cardiovascular disease’. Meanwhile, the original prediction of rising sea levels has been joined by the unknown factor of melting Greenland glaciers.

Even assuming that COP26 achieves its goals, some of the damage has already been done: “Even in the most optimistic scenario, we will experience severe climate change.”
What solutions can be found, even knowing that some of the disasters will be inevitable? More than ever, “local adaptation measures” will be needed, with a shift to “large-scale electricity efficiency measures”, again from renewable sources. There will also need to be a shift to a circular and local economy, with a drastic reduction in food waste.

Giorgi did not mince words when he rebuked businessmen and industrialists who promise to reduce their emissions “in a few years or decades”. By their very nature, greenhouse gas emissions are cumulative; therefore, “you can hardly get rid of them.” The mantra of zero emissions in 2050 can therefore only be achieved if we move incrementally: it is not serious, says the climate scientist, to argue that we want to continue at the current rate for “a few more years” and to promise to reduce pollution in two, five, ten years, not immediately. The 2050 limit was set by imagining cutting emissions from 2021 without further delay. Not 2022, 2025 or 2030. The carbon dioxide released now will have consequences in ten, twenty years; the situation is such that each further delay forces more and more drastic decisions in the future.

The longer we wait, even if it is only a few years, the worse the situation will become.