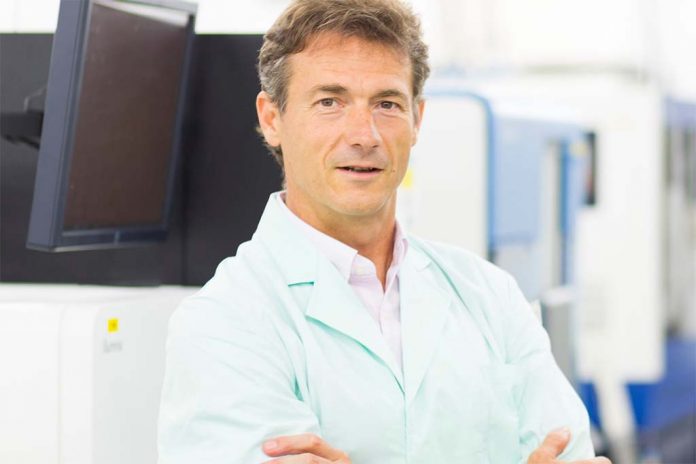 20.12.2020 – 13.20 – The creation of a database with the analysis of over twenty-four thousand DNAs to discover whether and how there may be a correlation between a given genetic variation and the risk of developing a disease.
This is a real revolution, which will make it possible to provide fundamental information on the DNA of the Italian population, as well as making enormous progress in the field of predictive medicine and in the prevention and treatment of cardiovascular, oncological and neurodegenerative diseases.
This is the first project to be carried out by two world-famous geneticists, Nicole Soranzo and Piero Carninci, within the Human Technopole, the institute for life sciences set up within MIND, (Milano Innovation District), at the Genomics Centre whose joint scientific leadership of the two scientists was recently announced.
We talked about this and more with Carninci himself, one of the most important scholars of the molecular functioning of DNA and RNA, deputy director of the RIKEN research centre for integrative medical sciences in Yokohama, Japan, who is working together with the Human Technopole since October 2019 as Advisor to the Genomics Centre.

A very important appointment. Will we see you often in Italy?

“The standard at the moment is to work from home, so I assume I will divide my time according to whether or not I can travel: from Milan, from Italy in general, or partially from here, from Japan.
It’s complicated to say now. I should have gone back and forth this year too, but unfortunately because of Covid-19 and the entering policy in Japan, it was not possible. But we’ve made a lot of use of telematics.
In particular, we are working on the ‘tools’ that will go into the Human Technopole and on the construction of the structure: this is a unique opportunity, not only it is an excellent initiative in Italy, but on an international level”.

What are the premises of the work that you and Nicole Soranzo are going to do?

“There is not just one genome that applies to everyone – Northern Europeans, Southern Europeans, Asians, Africans and so on – but there are many genomes that have small variations that differentiate them.
These variations, which are important for some modes of disease development, are specific for some traits between different populations in different regions of the world.
The problem is that at the moment most of the studies that sequence genomes, and therefore databases, are done mainly in countries that invest a lot in this kind of research, such as the UK and North America, and are consequently focused on populations of Northern European origin.

However, we need to balance this and go and analyse the genomes of other populations, such as the Italic population.
It is essential to study genomes as broadly as possible to understand whether the genetic determinations of diseases that occur are caused by specific variants.
In the coming years we will develop and advance a range of technologies and knowledge on functional genomics and genome sequencing in relation to the diseases themselves, and on the identification in the genome of regions that regulate functioning in health and disease.
We therefore want to continue to contribute to this map of human genomes, in particular by analysing Italic populations”.

It will start from the data collected by the Moli-sani study, more than twenty-four thousand DNAs.

“These are important numbers because they make it possible to carry out fundamental statistical analyses.
The population of Molise in particular has been followed for many years, and we have all the relevant medical records.
In other words, you know practically everything about all these thousands of people who have been followed – if they were healthy and how they are now – and you can associate all the genetic variations with their medical records”.

How will you proceed?

“The DNAs will be used to do an initial frequency analysis of genomic variants. These variations can be specifically Italian, Swedish, Finnish, English, Scottish and so on.
These are often associated with diseases, such as diabetes or the risk of heart attacks, tumours and many others.
It is therefore important to analyse these risk factors for the Italian population and to add these data to the already available database.
This is the part that Nicole Soranzo will take care of in particular”.

And you? What will you be working on?

“I will be looking at the various points that regulate genomes.
What we will put together will be an analysis to map the regions of the genome, including those that present these specific variations for Italic populations, going to analyse their function.
This will allow us to make an important contribution to a population that, in fact, has not yet been studied”.

Is there a start date for the project?

“The laboratories are expected to open in spring. Before that, however, we can already do some outsourcing: if we have DNA available, we can already do an initial screening.
But these things take time, so I don’t think we can set an ‘X date’ yet”.

Looking at the UK experience, can you already see what results will be possible in the future through these studies?

“With the UK Biobank it has become much easier to understand undiagnosable diseases, such as paediatric diseases, which were often not understood.
This development of sequencing protocols, together with the development of knowledge and databases, has meant that in the UK National Health Service we can now make diagnoses that are extremely more accurate than five years ago. Obviously, this solves many problems.

“For example, those of a couple who had a sick child and would like to know whether there is a risk of their second child being born with the same disease.
If the disease in the first child was caused by a new mutation that only appeared in that particular case, it is unlikely to occur again.
We can then give the parents a much more precise indication.

In what other ways and fields can this type of research be applied?

“There are so many other applications. Mapping is especially important in terms of research into the origin of human diseases that are still poorly understood: think of how much we still have to do for degenerative diseases, for example everything concerning the predisposition to neuronal degeneration, Alzheimer’s, Parkinson’s, dementia.
There is certainly a genetic basis that is still not understood at all, and that is why it is extremely important to study it. And there are so many other diseases and conditions for which understanding genes will be crucial to defining new therapies and preventions: I’m thinking of diabetes or cardiovascular diseases”.

Will it therefore be possible to develop increasingly precise and specific treatments?

“It always depends on the type of disease. For certain diseases that are caused by specific mutations in certain genes, and therefore where there are very clear genetic changes, yes, and today therapies are already being developed.
The Nobel Prize in Chemistry, awarded to French microbiologist Emmanuelle Charpentier and US biochemist Jennifer Doudna, goes precisely in this direction.
They have developed a method to change the genome sequence at will, and this is extremely important, and will be important, in order to be able to adjust a genomic region in the case of certain diseases”.

Coming back to the Human Technopole, as the name suggests, will it be a real ‘technopolis’?

“Yes. We don’t want to position ourselves as an isolated point in Italy, but as an entity that can bring together many things.
It will also be important to act as a spinoff: I am thinking, for example, of the business world, because if we are talking about new drugs it is important to have biotech companies, innovative biotechnology companies, developing them.
But also to do a bit of schooling. A very important point will be to have more students, and this is in the ‘mind’ of the Human Technopole complex: to create a critical mass”.

What do you mean?

Do you think that with the Human Technopole, Italy and southern Europe will play a different role on the international stage?

“At the moment the centre of gravity of research in Europe is definitely Anglo-Saxon; with the Human Technopole I think it will also move to the southern European and Mediterranean area.
I am also thinking of Barcelona, where there is the Centre for Genomic Regulation.
While international collaborations will continue – we have all been abroad, and we will continue to collaborate with the various international consortia we belong to – the Human Technopole of Milan also wants to work a lot with local institutions, in our case bringing the standardisation of genome studies to many other clinical research organisations that are already underway in Italy.
The fact that we are working with the Moli-sani study is a step in this direction, but we will also have other studies and work with other local research facilities in the Lombardy area and, who knows, maybe in the future we will also start working with Trieste”.