From the Karst to the “brand new”: the cable car is unveiled to the citizens 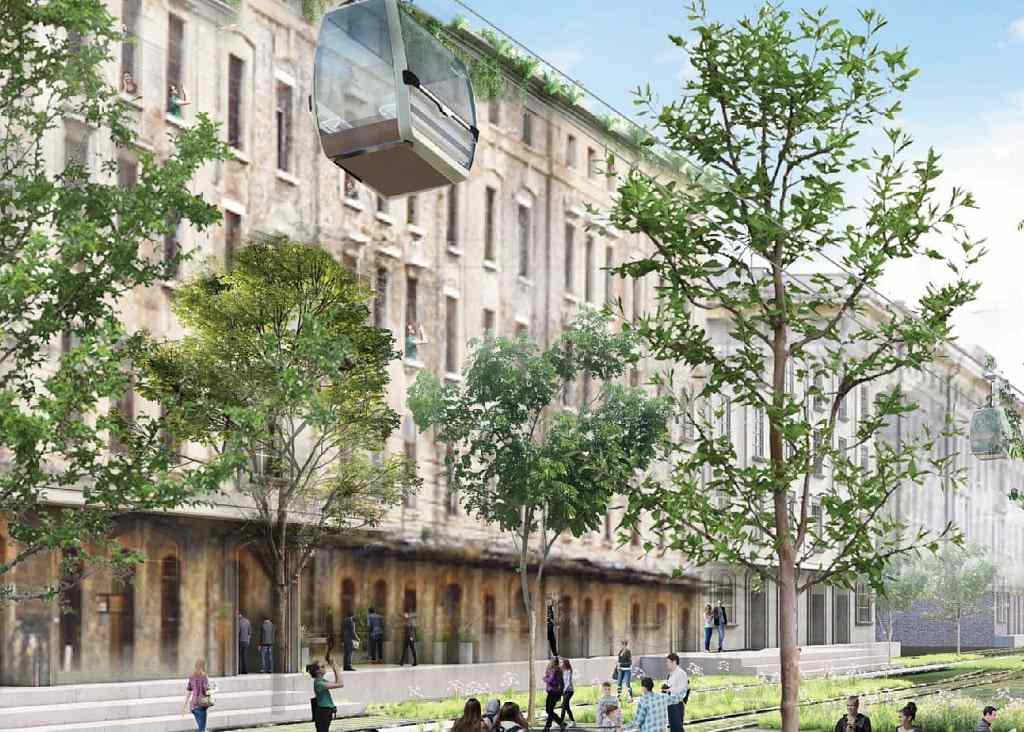 21.12.2021 – 09.50 – A drawing by the children of the recreation centre and a quote by the Russian writer Fyodor Dostoevsky. During the three days of conferences and the accompanying exhibition at the Auditorium Generali, Trieste’s City Council explains in a very simple way the extremely complex project of the future cableway between the Karst and Porto Vecchio. According to the narrative that unfolds on the exhibition panels, it was a group of children from Ricrestate who first drew a cableway that would connect the town to the Karst plateau. The idea was taken up by a trainee from the sustainable mobility department of the municipality, who came up with the idea of drawing a straight line connecting the Karst and the northern free point as the crow flies.
Five years later, the idea was translated into the design of a monocable gondola with automatic vehicle coupling and 10 seats (a gondola without seats).

This is essentially a cable car very similar to the cable cars used in the mountains and theoretically capable of guaranteeing extremely short waiting times (about 20 seconds), with the journey from the Karst taking a quarter of an hour as the crow flies. The cable car goes from the Karst to three different stations, namely Barcola-Bovedo, the core of Porto Vecchio (congress centre, museums, cruise terminal) and the pier IV. After crossing the karst ridge, the cable car would pass through the inner part of Porto Vecchio, which corresponds to the centre line of the warehouses.
According to engineer Bernetti, the main objective is to alleviate the pressure of car traffic from the northern entrance of the city, which corresponds to Italy: Currently, the three main routes, i.e. Strada del Friuli, Costiera and Via Commerciale, are completely congested.

The “participative” meeting with the Municipality of Trieste was opened with greetings from the Friuli Venezia Giulia Region: The Regional Councillor for Local Self-Government, Public Administration, Security and Immigration, Pierpaolo Roberti, described the cable car as “an important new symbol” and “a tourist attraction for the city”. According to Roberti, “the municipality has accepted the project very well” and received “funding from the NSRF”, because 48 million euros “are not peanuts to give to anyone”.
The mayor of Trieste, Roberto Dipiazza, expected the two sea cities to work closely together to build the cable car, as Genoa had also received 77 million euros from the NSRF. Dialogue is important, but “a unilateral no” is unacceptable.

For his part, the President of the Port Authority of the Eastern Adriatic, Zeno D’Agostino, brought greetings from the Port of Trieste, noting that the “Porto Vecchio is a complex reality” to which it is not easy to respond because “Trieste is not a big city compared to Hamburg”. The situation that has developed over the last twenty years, from terrorism to pandemic emergencies, requires a “one size fits all approach”. Indeed, “the real skill is not to predict or plan, but to manage an increasingly chaotic reality”. More than ever, “it is important to be able to reprogramme everything”. The Porto Vecchio “has in its DNA the ability to create traffic flows by train and by boat”. It is an area with a momentum that cannot be static. According to D’Agostino, such a meeting is therefore essential, because “the best ideas can come from anywhere”.

Architect Andreas Kipar of LAND Srl presented his plan for the revitalisation of Porto Vecchio’s public spaces, entitled “From Mobility to Spatiality”, which has already been the subject of conferences and meetings promoted by the municipality in the past. However, the novelty of the cable car requires a reassessment of Kipar’s landscape project, which, far from being weakened, is actually strengthened.
In (almost) perfect Italian, Kipar reminded us that “just yesterday in Zurich we discussed the city of the future”, in which “mobility is paramount”. According to Kipar, it is essential to design an Old Port that focuses “first on people and then on space”. Or, to quote Goethe, “then the architecture”. Kipar wanted to elaborate “an urban score” that aims to integrate buildings with public space. According to the Covid, we need “a new contract with our city and our neighbourhood” that emphasises the desire to inhabit the city, to inhabit public space rather than run away from it.

In this sense, we cannot talk about public space without green. Kipar’s speech was deeply European, celebrating the mix of a city that always owes all its innovations and innovative “spirit” to the port. But apart from the projects for the monumental park that have already been mentioned several times, there was no lack of novelties: According to Kipar, the masts of the cable car are built in a minimalist way to fit into the industrial substrate of the harbour. Slim, light structures or those whose pylons are reminiscent of a (hydraulic?) harbour crane or similar structures from the port’s past.

The heart of the meeting that preceded the debate, however, was the presentation by engineer Giulio Bernetti, Director of the Territory, Economy, Environment and Mobility Department of the Municipality of Trieste. Bernetti began by recalling that the city has invested 120 million in sustainable mobility, most of which goes to Porto Vecchio (worth mentioning, however, is the 15 million for the electric buses that will be operational in a year or two). The first step is to rebuild the route used by the citizens of Trieste, namely the connecting road.
As with the previous discussions on the “ovovia”, now renamed the “gondola”, the problem inevitably remains the northern access to the city, which suffers from the geographical narrowness limited by the presence of the Karst ridge. In previous decades, ambitious projects such as the “interval” or “large underground tunnels” had been formulated but are now not feasible for environmental and economic reasons. For a city that has “15,000 cars per day at the northern entrance”, of which “10,000 go to the city centre”, with “increasing traffic”, there is nothing left but the cable car as a solution to bypass the coastal bottleneck and/or the two alternative roads.

Why should the cable car with stations be built in Porto Vecchio?
Because it is a new area that has no traffic problems, but its growth will inevitably increase car traffic in Trieste. After all, the aim is not to replace the bus, but to be “a diversion from public transport” and to satisfy “the new demand to and in Porto Vecchio”.
In the tourism sector, the gondola, following the example of similar gondola lifts, e.g. in Dubrovnik, could allow group buses to go directly to Opicina, thus relieving the Largo Città di Santos junction.
In summary, the gondola has the advantage that it “uses little space, is quiet, runs electrically and reduces traffic”. The gondola is expected to carry 3.6 million passengers a year, which Bernetti does not think is impossible considering that bus lines like the 6 and 9 carry 2 million passengers a year. Bernetti believes that the six masts on the karst ridge will not harm the flora, although he admits that the gondola “is not compatible with tall trees”. According to Bernetti, the Bora wind will not slow down the gondola, which can withstand gusts of 70 to 80 km per hour, and no more than 20 closure days per year are planned. Later, during the debate on stage, it emerged that there will be an additional 18 days for maintenance.

The presentation was followed by a heated discussion, with a head-on confrontation between those for and against the gondola lift. There was a lack of willingness on the part of both sides to discuss the issue together: a discussion is only a discussion if you are placed on an equal footing, which was not possible given the lecture-like nature of the conference.
The city administration presented the criticism of the gondola lift as “fake news” and thus rejected a confrontation from the outset, while the political element in the associations’ “no” to the gondola lift again intensified the discussion.
Now that the dust has settled from the verbal melee, the gondola lift remains a preliminary project.