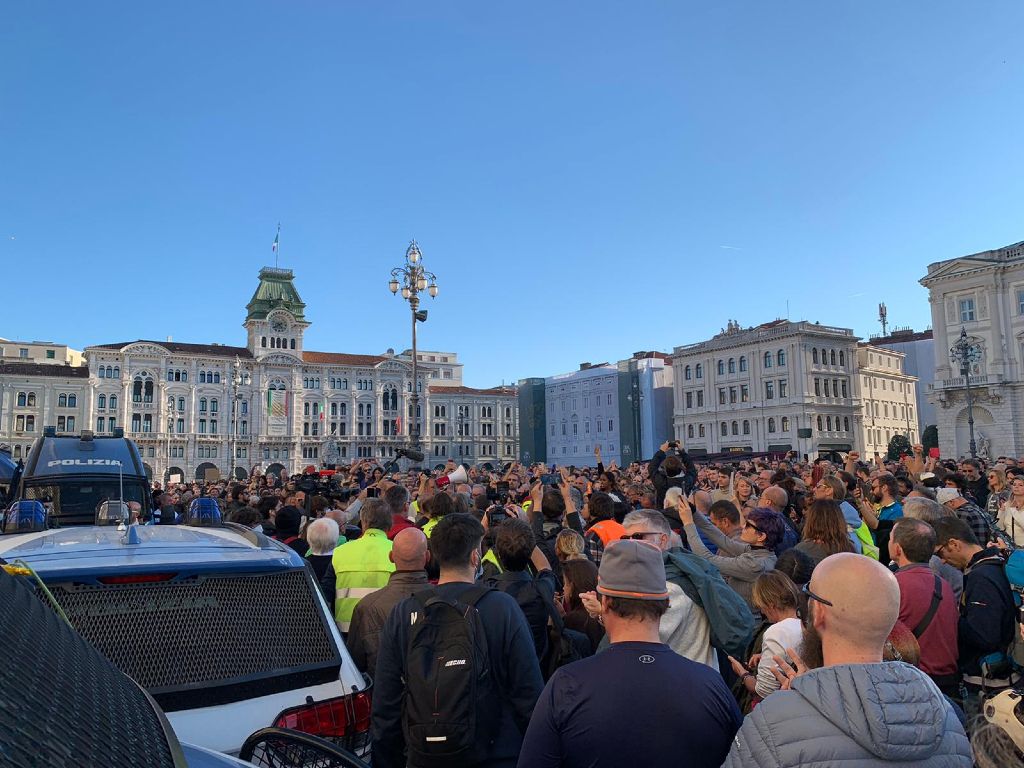 19.10.2021 – 11.55 – The fourth day of protests has ended. Now the fifth begins. The barricades close the gate IV, the protesters woke up this morning in Piazza Unità d’Italia. Their appointment is at 11 am at the Porto Vecchio. Then we will see. Yesterday, the eviction began at 8 am. After days, the police managed to evict the demonstrators after protracted and unfortunately unsuccessful attempts to reach an agreement.

Water cannon trucks were used and tear gas was fired after further resistance from the ‘no green pass’ demonstrators. The protest shifted to the streets. Viale Campi Elisi, via Gessi, via Tedeschi, piazza Carlo Alberto, via Campo Marzio and finally piazza Unità. This was the route followed by most of the demonstrators who continued their protest in front of the prefecture.

In the Campi Elisi area, a group of four hundred rioters attacked police forces, throwing objects and bottles and damaging several trash cans. More tear gas was used to disperse them again. Guerrilla warfare continued in this area for several hours, in Via Carli and Via Von Bruck. Meanwhile, the gate number IV was blocked again.

Police reported four people to the local prosecutor’s office for disrupting public services, inciting disobedience to state laws and violating the provisions of Article 18 of the TULPS on the duties of organisers of assemblies in public places. A fifth person was charged with resisting a public official. Among the police officers, three persons sustained minor injuries.

Meanwhile, in Piazza Unità, speeches were made by the No Green Pass Coordination Team and by the leader of what has become a very large group of people. Stefano Puzzer is exhausted, his voice broken. But he speaks to the crowd, telling them what to do. Early in the afternoon, after meeting with the prefect, he announces that he has reached a meeting with Lamorgese, Patuanelli and Speranza on the 23rd of October. He then declared that they would have to move to Porto Vecchio and the crowd dispersed. The protests are far from over and will continue today.

Police are controlling the city and the local police station is analysing video footage and continuing to make identifications.