The whole world stands with Draghi, and a non-solution is emerging. The unknowns of the perennial crisis 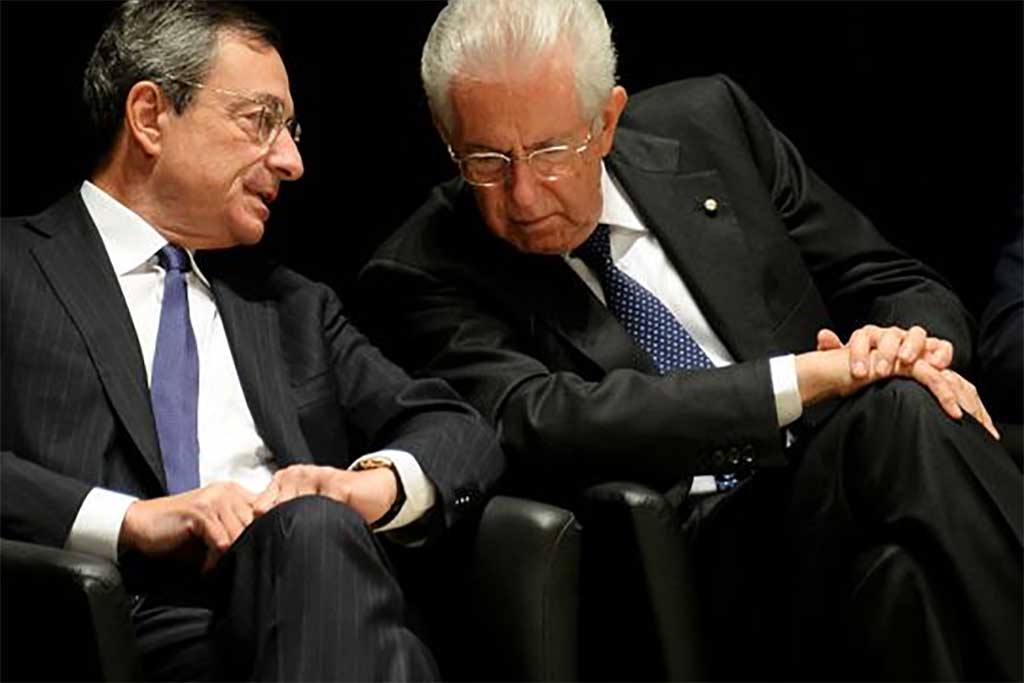 10.02.2021 – 12.15 – “The Italians have finally made a brilliant choice”. It is the phrase, including that ‘finally’, that best encapsulates what (almost) the whole world is saying about us ‘Italians’: Mario Draghi, the seventy-three-year-old former president of the European Central Bank who has been entrusted by Sergio Mattarella with the task of forming (yet another) technical government to take us out of the economic emergency caused by the Coronavirus (Draghi basically means just that: more than health, the Italian tragedy that is about to unfold from March onwards is the situation in terms of vanished jobs and entirely destroyed production and service chains), he is, for our country, the right man at the right time.
Europe and the world want him: sovereign bonds (BOTs, CTZs, CCTs, and BTPs, normally in the hands of large investors who are not individual citizens who save, and for a third controlled by foreign countries, including now China and Japan) will probably be those that will benefit most from the ‘Draghi effect’, for a possible overall and immediate gain of at least 7 per cent.

The BTPs, and this is no small thing, will benefit from the compression of the well-known spread between Italy and Germany, the one that triggered the ‘piloted fall’ of Silvio Berlusconi and the effect is already underway (we are back at 2015 levels). In a non-Draghi scenario, those who control BTPs, to make money, would have to wait.
The new Italian prime minister should be, in the opinion of most, a prime minister above politics; and certainly, by character and lifelong career, Draghi will be, yet this may be his biggest problem and weakness.
Draghi is expected to be able to bring together with the glue of his authority and charisma a fragmented parliament of which Giuseppe Conte has been the highest expression; yet Draghi is not a politician, and he never wanted to do politics; that he knows how to direct, between a Vito Crimi, a Zingaretti and a Matteo Salvini, the Italian parliamentary groups is all to be demonstrated yet.

Draghi then arrives with the blessing of Matteo Renzi, the great architect of his coming, and Renzi is the politician who has just undone the Italian government (consciously, and is losing out by finding himself even more marginalised than before); a solid Draghi majority is only conceivable with the support of either the Lega or the 5 Star Movement, and both now seem possible, listening to the spokesmen talk.
Yet, the Lega has always raised its voice against Europe, of which Mario Draghi is the embodiment, and the 5 Star Movement has been hoping that bankers and technocrats could sink into Dante’s inferno ever since Grillo first stepped onto the political stage (the Democratic Party remains in the middle: a Goldman Sachs banker sponsored by Zingaretti could be hard to swallow for the leftist base).

There is Forza Italia, which supports Draghi, but if it supports him, it risks breaking with its political allies. Watch out then for Fratelli d’Italia, and Salvini knows it: if, all of a sudden, even in this case, the Europe that Draghi represents has become welcome, it is only an instrumental move, and now that Conte (Giorgia Meloni’s primary target) is no longer there, who knows that an error by Matteo Salvini with regard to Draghi could not make the overcoming happen, with Fratelli d’Italia as strongest party of the right: difficult, in fact, that Meloni will support Draghi (perhaps impossible). Both Matteo Salvini and Giorgia Meloni would be better off going to the elections now: they would come out winners, and by a good margin. But there is the unknown, too great to take the risk of going to the polls, of the Recovery Fund (who will receive what? Which appointments, which currents and factions?) and after that, the scenario could be changed.

Foreign policy: what will Draghi do? With Joe Biden at the helm of the United States, one of the cornerstones of foreign policy across the Atlantic has become defining, together with the allies (and therefore also together with Italy), a common policy that allows us to look, if no longer from the heights of a supremacy now lost, but at least on an equal footing, at China, which has hooked its train, for now inextricably, to Russia and a discrete part of the Balkans; With Mario Draghi at Palazzo Chigi, this will be easier, and one could certainly not continue to think that it would be Luigi Di Maio (who, as Gramellini writes, received ‘good impressions’ from Draghi) who would mediate between Biden, Putin and Xi Jinping. With a big ‘but’: what if Biden, with Russia and China, had to put on a tough face? It would be a miracle for post-Brexit Europe (with Scotland winking at it): it would most likely become more cohesive (the Recovery Fund has already been a sign of this), and this is something Draghi has always hoped for and to which he has dedicated almost his entire life and career. And so things get complicated, because Draghi is an unknown quantity for both sides: more towards Biden (and therefore less Europe), or more towards a united Europe?

Coming back to us, however, and to our everyday life, which is not made up of Goldman Sachs and Xi Jinping, one feels a little less reassured if, putting aside (some people’s) enthusiasm for Giuseppe Conte returning home for the time being (empty-handed: a shame for him, he had won in Europe), one remembers that a government of technocrats above politics is not a good thing. It will be tougher than that of the now (unfairly) infamous Mario Monti (he had the great merit of washing the dirty linen that no one dared touch; along with the dirty water, however, he also threw away the good shoes and the baby’s bonnet). Monti played the role of a good technocrat, highly respected in the world and in Europe (which made a few benevolent concessions to our banks); we are still crying a few tears after the Monti government, and with the Draghi government, there will be more bitter ones: He has the task of overseeing the way in which Italy will administer enormous economic aid, something unprecedented in the context in which we live (you have to go back to the Second World War, and it was not the same), which Draghi himself helped to make possible through changes he facilitated when he was at the ECB.

And he will have to do it with the proverbial iron fist in a velvet glove. The recipe for tears he has already indicated in the past months before knowing that it would be his turn to take up the cooker, and the tears would have been necessary, inevitable and who knows, maybe we will be better off afterwards; but politics has the great merit of doing something that technocrats do very badly: mediating and finding compromises. In essence, the appointment of Mario Draghi represents the defeat of the entire Italian political class (a bit like Mattarella saying: “You were not able to do anything and were about to do worse”: prince of the defeat the 5 Star Movement, which after promising so much by supporting Draghi finds itself losing credibility), with the sole exception partly of Matteo Salvini and fully of Giorgia Meloni herself, who unlike Draghi does not please everyone (for the international press, very often Meloni’s party is ‘the neo-fascist party’).

This is why the technical government (we are getting used to ‘strong men’: let’s not make a boast of it, and it does not make the figure of the head of state any more authoritative), in the end, never works flawlessly. Draghi does not represent, for Italy, a solution, but becomes the symbol of the Italian inability to solve a problem that has lasted too long and that is continuing: the now stale figurative duopoly between populism and technocracy, which is not only in Italy but has affected many nations (from Greece to the United States), is never the solution, it is only the transit towards something that must be filled by something else, namely the popular vote: popular vote or elections “Whatever it takes”, because without elections this something with which to fill a void (which has been empty for a long time) will never come.