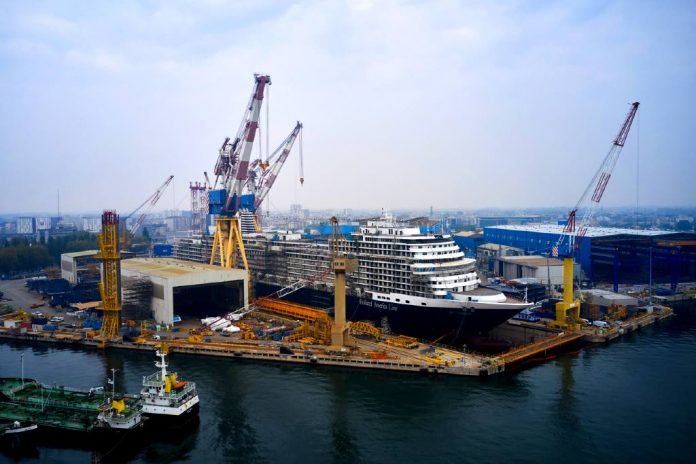 02.09.2020 – 09.20 – “Rotterdam”, the new cruise ship which Fincantieri is building for the ship-owner Holland America Line, a brand under Carnival Corporation & plc, the world’s largest cruise operator, was launched today at the Marghera (Venice) shipyard. The fitting-out phase can now begin, ending in summer 2021 with the handing over of the ship.
The event was introduced by the traditional and well-wishing “coin ceremony”, consisting, according to an ancient shipbuilding custom, in welding a silver dollar on the last deck of the ship.
Madrina of the ceremony was Mai Elmar, executive director of Cruise Port Rotterdam in the Netherlands.

The ceremony was attended, among others, by Cyril Tatar, Holland America Group Vice President New Building on behalf of the ship-owner and Antonio Quintano, shipyard director, on behalf of Fincantieri.
The new unit, sister ship of “Koningsdam” and “Nieuw Statendam”, the “Pinnacle” class ships delivered respectively in March 2016 and 2018 from the same shipyard, is the fourteenth ship built for this brand by the Marghera shipyard.
She will be about 99,800 gross tons, almost 300 meters long, with accommodation for 2,668 passengers on board in 1,340 cabins.

“Rotterdam” will be characterized by a modern and contemporary style, which blends perfectly with the traditional elegance distinguishing all the ships in the fleet.
The design will be created, as for the sister ships, by two of the world’s major and prestigious architecture studios, Tihany Design and Yran & Storbraaten, with “the architecture of music” being an inspirational element for the design of many public areas.
The ship’s technology is aimed at optimizing energy efficiency and minimizing environmental impact and it responds to the most demanding and current safety regulations.