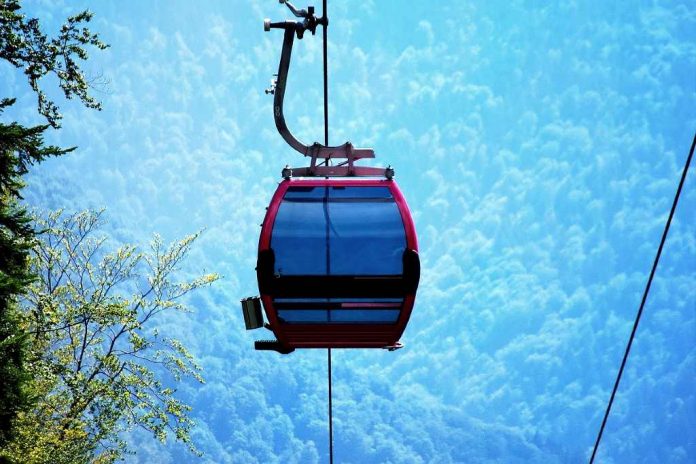 17.09.2020 – 16.00 – Once again this year, Trieste is taking part in the European Mobility Week, which will fill the city from 16th to 22nd September 2020 with numerous initiatives focused on sustainability and improving the quality of life in the city.
Yesterday, Wednesday 16th September, the Municipality of Trieste (Department of Territory, Economy, Environment and Mobility) held a videoconference with the engineering office Monplan Ingegneria — in order to talk about a very delicate topic, which has been dear to public debate for several years: the “Trieste-Porto Vecchio-Carso metropolitan cable way”.
A project which, according to the engineer Andrea Gobber, is technically and economically
feasible and which could connect the coastal areas of Porto Vecchio with the hinterland of
Trieste. The winner of the competition for the design of this colossal reality is Studio
Monplan Ingegneria, which hopes to build a cable way linking Opicina and Trieste, passing through the Porto Vecchio.

“The territory of Trieste is occupied by a hilly slope and therefore the northern part is located on a karst plateau and the connection to the Port is a very delicate issue – Gobber begins – so innovative solutions are needed to provide answers to the critical issues that have been identified for years”.
This is an opportunity to turn even more towards sustainable transport and to improve as
much as possible the well-known road traffic problem in Trieste.
“There is a lack of a conjunction of transport systems that can provide continuity of service
even for those arriving from outside the city“.
“What we initially tried to evaluate – declares Gobber – was the possibility of joining the
northern area with the seafront and, at a later stage, the possibility of serving the Old Port and then connecting it with the Railway Station“.

An idea that has already existed for several years but has never been completed and which, to date, continues to seek an optimal direction: passengers would start with the cable car from Opicina, then arrive at the first intermediate station near the Bovedo (Barcola) car park, then passing through Porto Vecchio and finally reaching the destination, the centre of Trieste, in the Molo Quarto area.
“This choice required the identification of suitable areas but, above all, it is the result of an
in-depth study of a suitable route so that the project does not interfere with the already
foreseen road network in the Porto Vecchio development plan“.
“The aim – continues Studio Monplan Ingegneria’s representative – is to remove as many vehicles as possible from the road, reduce travel times, guarantee comfort and respond to both tourist and regular traffic”.
But why a cable car?

The data presented during the videoconference showed how the cable way allows to minimize and enhance space, reduce traffic and give more opportunities for the development of green areas, increase safety on the roads and reduce travel times with greater comfort, with less Co2 emissions.
Gobber’s project would allow an hourly capacity of 1800 people and, to limit the impact on the landscape in the non-slope section of the route, the height of the line and catenary
supports would be below the skyline of the existing buildings in Porto Vecchio.
Waiting times would be extremely short, with a cab arriving every 20 seconds, as would the
travel time: from Opicina to Trieste, and vice versa, it would take 16 minutes.
Speaking about the integration of the cable car stations in urban areas, we have not arrived at definitive solutions, “but we have sketched out the necessary volumes and how they should be located”.

“An in-depth study on the subject will have to be carried out on the stations of Porto Vecchio and Trieste”.
A question that created several concerns about such a project is the characteristic Bora
Triestina, a very strong wind, but Engineer Gobber reassured by pointing out that “in the case of phenomena related to the bora, two statistical studies based on data from the last 40 years and the last 25 have been followed, making an analysis of days with wind speeds over 80 km per hour: we have a forecast of plant downtime for the whole day for 20 days a year, while for another 15 we expect plant downtime for a few hours or half a day”.
This project, still immersed in the Odi et Amo of public debate, would take two years to complete.
“With a view to sustainable mobility”, Department Director Giulio Bernetti points out, “the
possibility of a cableway from the Karst to the heart of the city was well received and we
have decided, thanks to ministerial funding, to introduce this project”.