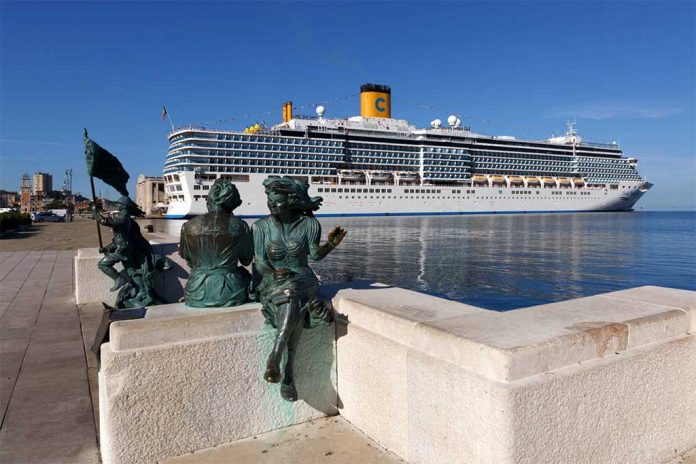 10.09.2020 – 11.00 – The possibility for Trieste to transform itself into a stable cruise center, “bypassing” Venice and its problems, from the excessively shallow seabed to the turmoil of the “No Grandi Navi” movement, worries the Serenissima, especially after the statements to the Closing Ceremony of ESOF2020 by Mayor Roberto Dipiazza and the Minister of Economic Development Stefano Patuanelli. On the other hand, the cruise companies, especially in the light of the Coronavirus emergency, have preferred to fall back on Trieste.
In particular, having the mayoral elections at the doorstep, it “irritates” how the Venetian Lega does not criticize the decisions of the Lega of the Friuli Venezia Giulia region, which explicitly aims to transform Trieste into the new cruise hub of the North Adriatic. The controversy started from the councillor Ugo Bergamo, leader of “Venezia è Tua“, who ironically asked the mayor Brugnaro “What do you think of the statements of the President of Friuli, the leghista Fedriga, who said he would make Trieste a cruise an alternative to Venice for cruise ships? At least for once, let’s all defend our port together“.

An attack then shared, through an interview on the local newspaper Nuova di Venezia and Mestre, by Pier Paolo Baretta, mayoral candidate of the center-left in Venice: “While the mayor and Salvini attack the Agenzia per Venezia (Agency for Venice), which will finally have a single management for the protection of the lagoon, the governor of Friuli Venezia Giulia Massimiliamo Fedriga is negotiating with the cruise companies to move them, definitively, from Venice to Trieste”.
During the interview the journalist tries to reply, observing that “The choice to go to Trieste, for this season, was made by the companies. Fedriga serves the interests of his region”.
“In Trieste they obviously have their own opinion,” Baretta concedes, “but the Lega is the same, in Venice and in Trieste. When the mayor talks about the traitors of Venice he should look around, instead of arguing with everyone the mayor should try to make political synthesis”.

The loss of cruise traffic in Venice is a hard blow for the many categories of dockworkers; and yet, from a tourist point of view, is it really this vulnus to the city? Trieste will never be able to compete with Venice; its cruise tourism remains of the “hit-and-run” type that does not last more than an afternoon or a weekend.
Consequently, it is not difficult to imagine that the tourists who come to Trieste will afterwards go to Venice, without devastating the lagoon with big ships. On the other hand, although the will to bring cruises back to Venice prevails both on the right and on the left, UNESCO has clearly stated that the survival of the natural and urban ecosystem of the Serenissima is incompatible with white ship tourism.