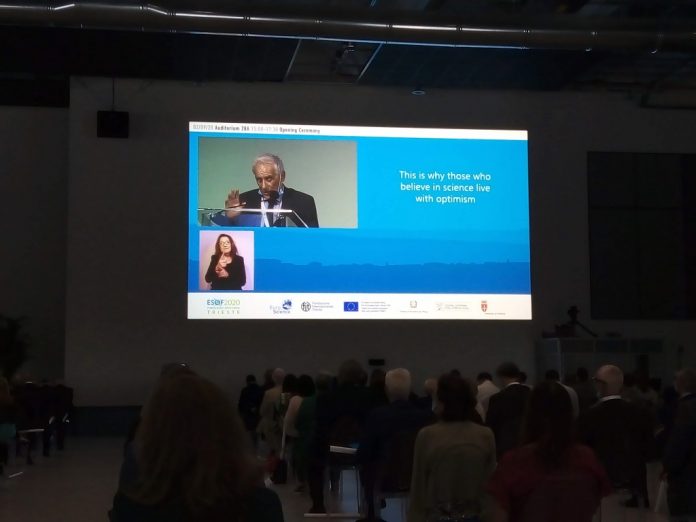 03.09.2020 – 09.20 – The robotic voice of a thermo scanner authorizes us to pass; an ESOF2020 volunteer checks that we have our badge; then we proceed, passing by the arrows, the sound directions, the passages, before sitting in the Auditorium dedicated to Pierparolo Ferrante, in that remodeled warehouse 28 in the Trieste Convention Center. The Coronavirus emergency imposes on a scientific event such as the Euroscience Open Forum Trieste (in short, now indispensable hashtag, nickname, mystical mantra: ESOF2020) a series of health procedures that are themselves invention of science; and as such, through the security apparatus, the visitor becomes part of that science discussed and analyzed in the Old Harbour. Precisely the deep pride for the results achieved, for having been able to experiment, despite all the difficulties, an edition halfway between virtual and real, is the thin red thread that brought together mayors and governors, scientists and cardinals, virologists and physicists in the opening ceremony which took place on september the 3rd.

Stefano Fantoni: “Knowledge, not ignorance, leads to greater freedom”. Stefano Fantoni, tireless Champion of ESOF2020, introduced the event outlining the protagonists and creators of the Scientific Forum: his speech was marked by a deep optimism towards science where he echoed that “Dare to know!” of Kantian memory. “Do not be afraid of knowledge! – exhorted Fantoni – We must not be afraid of it especially in times of crisis, because it is precisely in these moments that we grasp the profound value, constitutive of modernity, of an approach to reality based on trust in the ability of human beings to investigate and know the world”.
“Don’t be afraid of the new! – spurred Fantoni – Knowledge, not ignorance, leads to greater freedom. It is no coincidence that the motto of ESOF2020 Freedom for Science, Science for Freedom reminds us that knowledge must be free, without barriers”.

This look towards the future of Fantoni could only conclude with a quote from the philosopher Karl Popper: “The future is very open, and depends on us, on all of us. It depends on what you and I and many other men do and will do, today, tomorrow and the day after tomorrow. And what we do and will do depends in turn on our thoughts and desires, our hopes and fears (…) We must become the creators of our destiny. We must learn to do things in the best way we can and to go in search of our mistakes”.
Michael Matlosz: “It would have been literally unthinkable for ESOF2020 not
to happen” Michael Matlosz, President of EuroScience, who had already arrived in the city in February 2020, gave off an overwhelming enthusiasm: “This convention was only possible because this is ESOF and this is Trieste.

Being optimistic is a choice; and it is the right one. It always is. Feeling optimistic allows us to face the challenges and that is what we have done. ESOF is the open forum par excellence; for exchanges, discussions, debates on science, scientific practices and its role in society. It would have been literally unthinkable for ESOF2020 not to happen; at such a crucial time in history such an event was necessary, indispensable. All those who allowed ESOF2020 to happen were heroes; all of them, every last one of them”.
Roberto Dipiazza: “Trieste, a natural multi-ethnic city, home of ESOF2020”.
The mayor of Trieste, Roberto Dipiazza, who just the day before yesterday inaugurated the ESOF2020 Conference Center recalled how “Trieste is a multi-ethnic city that has founded its success on the sea”; a “European”, indeed, “Central European” city that boasts the presence of religious minorities that are by now secular, ranging from the Serbian Orthodox to the Greeks and Jews with one of the “largest synagogues in Europe”.

Trieste is also the city “of Generali and Allianz insurance companies, Fincantieri, of important international companies such as Illy Caffè and also the first commercial port in the country”. A panegyric culminated with the treasury of the Porto Vecchio, whose decomission allowed ESOF2020.
Cardinal Parolin: “Dialogue with science for the protection of man and the environment”.
The opening speech was given by Cardinal Pietro Parolin, State Secretary of the Vatican City, with a discussion focused on the relationship between humanity, the environment and technology: “In the dialogue with science, we listen with great interest to the voice that
scientists and researchers raise to protect above all the dignity of the human being, global justice and the care of the common home. These three elements are essential to be able to think and realize a future of peaceful coexistence among people“.

With an explicit reference to Pope Francis Laudato’s Encyclical on ecological issues, His Eminence continued by reiterating that “If we want to survive, and if we want life on the Planet to survive, we must learn to take responsibility for our common home at a global level.
Gaetano Manfredi: “Research education as a fundamental strategic mission”. Gaetano Manfredi, Minister of University and Research, conducted a long speech in which he mixed reflections on the role of the researcher, moving on to post-Covid society and finally examining the medievalist drift of the Luddite groups that inflame the Internet (and real life).
“This crisis is an extraordinary accelerator of changes already underway. – began Manfredi – I would like to highlight three of them: first, the profound impact of technological innovation on the organization of our society. This, in turn, transforms the labour market that now focuses on pure skills. In this post-Covid age it is also necessary to discuss the international value of research. Historically this has always been transnational, overcoming
geographical barriers. The researcher has always been a citizen of the world, seeing in the relationship and exchange its determining value. A reflection all the more necessary in this era of nationalism. Especially in an international vision of research, where soft power is linked to how much the state funds science“.

“In this sense ESOF2020 is a perfect opportunity to put research back at the center, making citizens understand how their economic well-being is linked to the growth of knowledge. I fully agree in this area with Stefano Fantoni in defining research as a “common good” that must be made proper to citizens.
The role of the citizen must be brought back to the forefront, without diminishing science“.
“We must also strengthen basic research, despite the fact that it is attacked, because it is thought to be “of little use”. I usually make this parallel in this regard. If we want beautiful plants and flowers to grow in a field, that field must be sown. Nothing grows in the desert. The basic research is the sowing of the soil, from which will germinate concrete consequences in everyday life.

In this sense, the government intends to invest in research, with massive funding“.
“There is a growing diffusion of an anti-scientific culture within society. The researcher has his share of responsibility, because he has to disclose what he produces. There is a fundamental problem, because today the application of many discoveries is slowed down by the anti-scientific attitude of society. Think of vaccines, 5G, renewable energy … technologies that are clearly a benefit for society and people, which are opposed by those same people who could benefit from it. A sign that we have not been able to explain that what we study, research, “do” is useful. The ability to disseminate and share, through a form of widespread knowledge, must become a fundamental strategic mission” – concluded Manfredi.

Fabiola Gianotti: “Science is more than knowledge, it is a system of values”. Fabiola Gianotti, Director General of CERN, has retraced the history of her organization observing how the great crises are also great opportunities: CERN itself was founded after the Second World War; and equally precious for scientific progress is the occasion of the Covid-19 pandemic.
Physics has mantained the international nature of CERN, which tends to attract personalities  geniuses not only from the West, but from developing countries as well, gathering around science a multiplicity of religions, nations and ethnicities united by young age and early scientific interests. Through the National Institute of Nuclear Physics (INFM) with the University of Trieste, Italy has played a lion’s share regarding CERN. Over the decades his studies seemingly disconnected from reality have allowed the evolution of the Internet and the use – among many examples – of those electron microscopes that have identified the plague of the Coronavirus.

“The Covid-19 has shaken our society and has shown that our model is not sustainable. Now we can try to do two things. We can try to fix it and return to the old normality or we can use this crisis as an opportunity to move towards a more sustainable and egalitarian world. A world towards which science can bring us closer” concluded Fabiola Gianotti.
Ilaria Capua: “The Covid-19 is crying out to us to be more interdisciplinary”.
Ilaria Capua, virologist and professor at the University of Florida, led the final speech for the panel “Scientific talks” that concluded the main part of the Opening Ceremony. Before the videoconference was interrupted due to the hurricane season, the virologist outlined the overall picture of the Coronavirus: from its spread and its causes, highlighting the inherent weaknesses of today’s Western society. “No crisis should be wasted,” began the virologist, resuming what Gianotti mentioned. “Covid-19 is shouting to us to speed up interdisciplinary research, to overcome the barriers between different sectors”.

In a hammering series of panels, entitled “disease”, Ilaria Capua observed the “disease of economy”, linked to the vertical collapse of employment, the “disease of fragile cities” taking Milan and Italian cities whose complex ecosystem has reacted badly to an emergency of this caliber; passing to the “disease of movement” linked to the impossibility to travel, to the “disease of pollution” linked to the collapse of pollution connected to the lockdown; to the “disease of sociality” caused by the impossibility to meet and embrace one’s friends and relatives; to the “Sex and Covid-19” or how the Coronavirus mostly affects the male sex. Particularly interesting, especially considering how Capua lives in the United States, is the opinion on the protests: they should not be banned, because the more they are banned, the more people tend to promote them, abandoning security measures such as masks and social distancing. A vicious circle is then created, as demonstrated overseas.

The implied reference is obvious: in fact, on the screen appear the photos of Black Lives Matter. Despite everything Capua believes that there is a rainbow at the end of the storm; or to use the English expression, “a silver lining”. The Coronavirus in fact offers a rare opportunity to restructure its company; and as Gianotti herself foretold, even Ilaria Capua thinks that “Time is ready for another paradigm shift”.