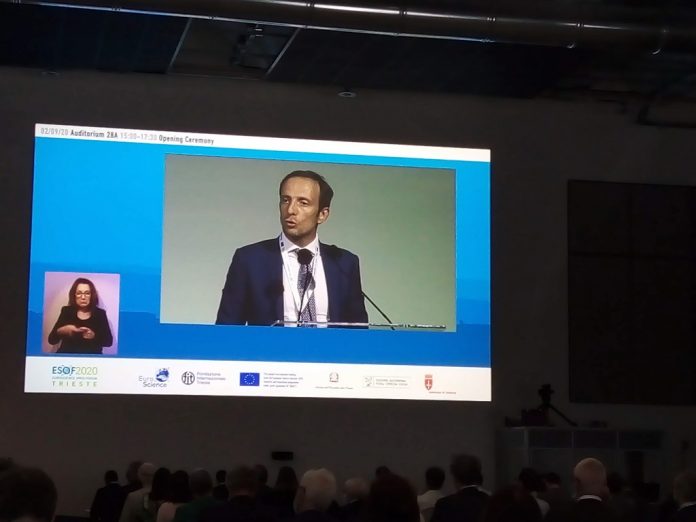 03.09.2020 – 19.00 – In the last weeks of February 2020, Friuli Venezia Giulia preceded the majority of the other Italian regions in the closure of schools and educational services for children, following a “precautionary” path that moved from the fear of contagion coming from the Veneto region.
The memory of these first weeks and the subsequent emergency phase linked to the lockdown echoed in the speech held yesterday by Governor Massimiliano Fedriga, during the Opening Ceremony of ESOF2020.
An intervention that has been decisively disengaged from the generic homages of the institutions, preferring to place some criticism side by side with the praise.
“I apologize to the important institutional representatives,” began Fedriga, “but my first thanks go to Stefano Fantoni and his strong commitment to ESOF2020; secondly I would like to thank the government for being represented here today by the Minister of Research and the Vatican State, for the presence of His Holiness’ secretary”.

“I think that his presence is particularly important especially for the message that this edition of ESOF2020 wants to launch: freedom linked to science“.
“Everyone knows,” continued the governor, “that there is no freedom without knowledge and truth. Otherwise there is no free will. If I have three roads to choose, but I do not know where they lead, there is no real choice. It’s just pure chance. The process of knowledge, on the other hand, cannot prescind from ethics. Freedom is not anarchy, but responsibility. I think these are principles that we must also follow in the scientific discussion. A scientific discussion that we have seen and heard even during the moments of the pandemic, which hit our populations and territories hard.

Also during this ESOF2020 I think it could be an important opportunity to question ourselves, to know our limits, to know how to change the things that didn’t work”. Following this reasoning, the governor has criticized the “big international organizations”as well.
However, since they were not appointed, it was not clear whether he referred to the WHO – World Health Organization, the European Union for the phase of “blockage” and confusion that followed the emergency in Europe or other academic entities. The WHO is the classic punching bag of the European and American political class, but its chronic lack of funds prevents it from intervening effectively, limiting it to generic advice for action. On the other hand, Fedriga‘s speech remained generic; indeed, it reaffirmed the importance of research and science.

“Because I think that in that principle of truth lies also the frankness of information. Because I think it is necessary to say it clearly: the great scientific institutions weren’t there too many times during this pandemic. And I say this as President of the Region, in the presence of the Councillor in charge of health Riccardo Riccardi: we have relied on local doctors and experts. Because it seems absurd to me that the large international organizations did not think to equip themselves with ventilators, ppe and adequate containment measures, while we could see what the pandemicwas causing in the first places affected. We have to understand what the limits of the whole of humanity are; and know how to face them in a perhaps a little  more humble way.

Perhaps the work of nurses and doctors is worth more than some publication. The contribution that the scientific world can give today is indispensable, because we are hearing, even now, speeches that have nothing to do with the safety of people and the scientific truth. The authority of science must be reaffirmed.
I find it absurd that there are people who want to protest against masks and social distancing. Politics has taken its share of responsibility; now it is up to science”. “Trieste and the Friuli Venezia Giulia region itself have scientific institutions through which the development process of the entire regional economy must pass. It is necessary to enhance basic research, also knowing how to outline the possible derivations in terms of job opportunities and economic growth” – concluded Fedriga, referring back to the speech made on the occasion of the inauguration of the Trieste Convention Center.