Return of the Narodni Dom, Fratelli d’Italia: “More than inappropriate. We will oppose to this”. 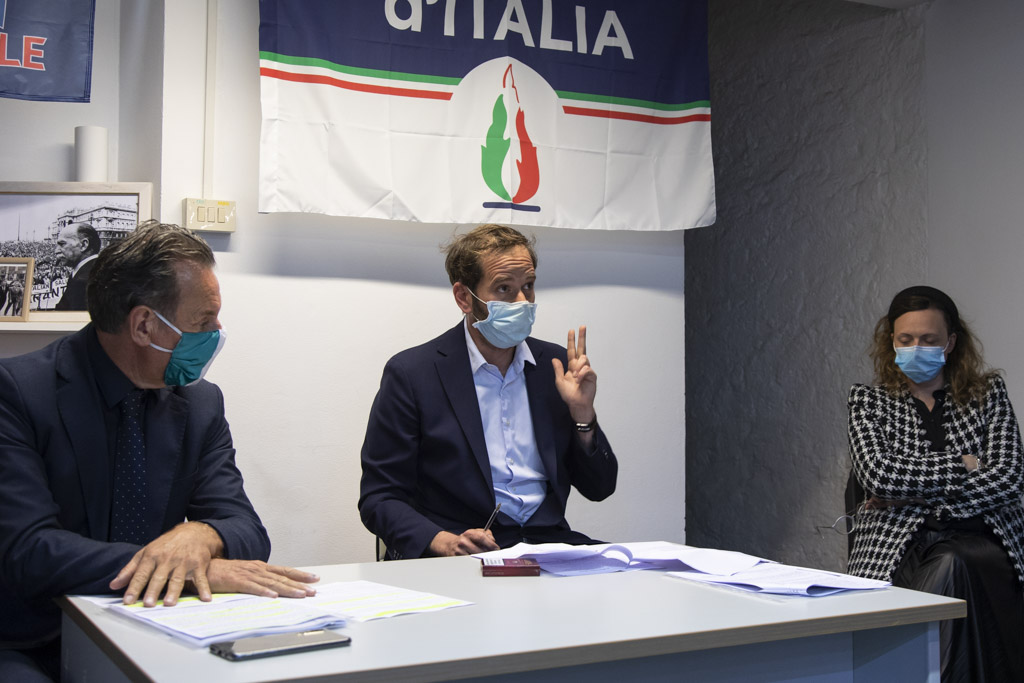 23.05.2020 – 12.30 – A double inappropriateness, from both the historical-social point of view as well as from economic and linked to the current crisis, is the reason of Fratelli d’Italia’s opposition to the restitution to the Slovenian community of the building situated in Via Fabio Filzi in Trieste, the current headquarters of the Modern Languages Studies Section for Interpreters and Translators (SSLMIT) of the University of Trieste, formerly Narodni Dom, to the Slovenian community.
This was stated today at a press conference by the group leader of Fratelli d’Italia in the Friuli Venezia Giulia Region, Claudio Giacomelli, together with Fabio Scoccimarro, Salvatore Porro and Elisa Lodi.
“We are talking,” Giacomelli told the press, “about an alleged pre-war damage of 100 years ago, which had already been compensated at the end of the fifties as provided for in the Treaty of London”.

The compensation for the fire in the Balkan hotel, the former name of the Narodni Dom, was paid with millions and millions of lire after the war, which allowed the restructuring of the Slovenian theatre in Via Petronio in Trieste.
The website of the theatre itself reports it. Italy is now in a situation of economic crisis due to the Coronavirus emergency: the return operation would involve a total value of 30 million euros, and the relocation of a top-class academic institution, both Italian and European, which is currently located in Via Filzi.

In addition, the restoration of the ‘Gregoretti Due’ building, which could be worth 4 or 5 million euros, would be paid for by the Italian state. Giacomelli, to make a comparison, recalled that with 4 million euros it would be possible to intervene on the smoke and fire-alarm systems of all schools in Trieste, adapting them to the regulations and safety levels currently required.
“The Italian state”, he continued, “is going to pay all this to give a building of high value, 9 and a half million euros, free of charge, to two private associations.
They did not ask to be registered as owners, but only to loan it, so that the very significant extraordinary management and maintenance costs will be paid by Italy. If the operation goes ahead, we will involve the Court of Auditors”.

It would be absolutely unthinkable, therefore, according to Fratelli d’Italia, to complete the operation of restitution in the current crisis phase only to respect the agreement signed years ago between Italy and Slovenia by Minister Angelino Alfano.
Giacomelli expresses criticism also on the behaviour of Slovenia itself towards Italy regarding other issues: “Slovenia should be called into diplomatic dispute, summoning its ambassador, asking him to explain what is happening right now on the Balkan route and why they allow a continuous flow of irregular migrants to pass in defiance of the Dublin Treaty”.

“The Trieste visit of the President of the Republic, Sergio Mattarella, and the Slovenian President, Borut Pahor, for the centenary of the Narodni Dom is scheduled for July the 13th”.
I also hope that an apology will also be asked for the foibe and for what the countries of the former Yugoslavia have done in Trieste. As Willy Brandt did in Warsaw: it would be very useful to throw water on the fire, and not petrol, as is being done instead”.

75 years after the end of the Second World War, continues Scoccimarro, there would be no need for divisive initiatives by the two communities, the Italian and the Slovenian, whose relations are growing stronger from year to year. “What is happening is the result of yet another error of the goverment, then led by Renzi, who, in order to get the Slovenian votes on the issue of the European Medicines Agency, and to obtain the transfer of Italy, has made an additional concession.

“But they miscalculated something, because the Agency went to Holland”. According to Scoccimarro, the time has come to overcome what happened in the last century: “The two dictatorships, the Nazi and the Communist, were both condemned by the European Parliament.
The Slovenian community in Trieste is a historical presence and nobody wants or will ever deny it.
Certain members of the Left-wing have a one-sided view of what history is: it is not clear, if you don’t explain it, how the violence in the Balkan was born and why people went to demonstrate under a building that was never owned by the Slovenian community, as can be seen from the land register extract I have here with me, which shows the properties of the last two centuries.

There is no deed in favour of Slovenian associations. In those years panslavism and Italian nationalism were in contrast; the serious fact of the nationalists’ assault on Balkan, at a time when fascism had only been in existence for a few months, occurred in reaction to the events happened in Split the day before.
That there were Slovenian associations in Balkan was right; unfortunately, both Italian nationalists and fascists, as well as Slovenian and socialists, were armed at that time: in the context of a hundred years ago, there was a clash between two violent nationalisms.

And both were wrong, one crime does not equal another crime. Fascism had continued to harass the Slovenes as the Italian nationalists had done in the nineteenth century; in 1920, however, the Italian government was socialist. It does not matter who set fire to the Narodni Dom, it is still a violent, unjustifiable and condemnable gesture.
To maintain, however, a partial vision of history and to evoke today, in 2020, the divisive facts of the city of Trieste that date back to 1920 is highly inappropriate”, concluded Giacomelli, “We imagine,” concluded Giacomelli, “that the Ministry of the Interior and the State Property Agency of Rome don’t know absolutely nothing about the ‘Gregoretti Due‘ in Trieste.

I would like to underline that this is not an ideological issue: I have deliberately started by stressing its economic impracticability in the current heavy crisis situation.
Millions and millions of euros, for something we have already repaid, cannot be spent at the moment: it would be shameful. And we will oppose it: at the moment we are fighting together with the Government to plug the 600 or 700 million hole due to the Covid health emergency, and we do not accept a 30 million operation for the Narodni Dom.
And if this ‘someone’ thinks of replacing the votes of Fratelli d’Italia in the City Council of Trieste with those of the Democratic Party, he should know that until the next elections he will always have to rely on the votes of the PD and no longer on ours.

The majority is not a bus on which one gets on and off depending on the situation. Who started talking about the need for peace between Italians and Slovenes was the Social Movement in the fifties. Fratelli d’Italia is in favor of closing the accounts with history: we are so much so, that we thought for the Narodni Dom they were already closed, since the Italian State has already compensated it”.