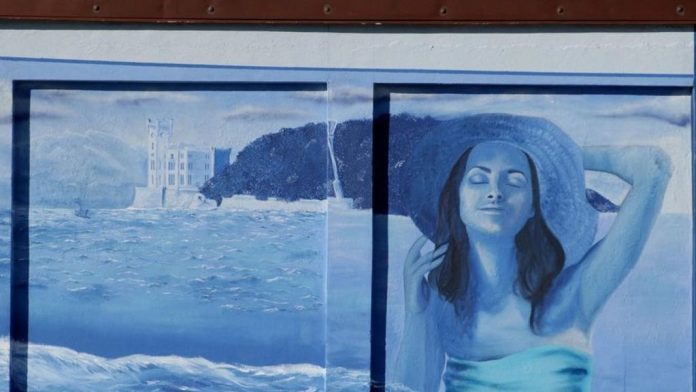 08.04.2020 – 11.10 – Upgrading the city through art, allowing its inhabitants to
“regain possession” of it and rediscover its urban spaces.
This is the goal of the Chromopolis project in Trieste, perhaps not very known yet, but already present and operational in the territory of the city.
The initiative was launched in 2016 as part of the development and promotion of the emerging art project Artefatto by the Youth Area Project, in collaboration with the Department of Youth Policy of the City of Trieste, then under the responsibility of Councillor Giorgio Rossi, and now under the supervision of Councillor Francesca De Santis.
The aim of Chromopolis is to redevelop some areas of the city, mainly in the
periphery, developing real urban art projects, conceived and created by young local
artists.

Currently the areas of Trieste that have already been affected by the initiative are the municipal bath “La Lanterna” (Pedocin), the Grezar Stadium and the Nereo Rocco Stadium and, thanks to the collaboration with Edilmaster, Borgo San Sergio, with the recent work of Jan Sedmak, and the Skate Park of Altura.
The project combines many elements: from the suburbs to street art, up to young people and, last but not least, the citizens themselves.
As Councillor De Santis explains, in fact, within the works carried out as part of the
urban art project, “there is no single ‘theme’ imposed, on the contrary, they are designed and developed throug a shared vision between artists and communities” as in the case of Borgo San Sergio where, “after creating some sketches, we first tried to understand what could have pleased the inhabitants of the area themselves”.
After that, the councillor explains, “we still try to give creative autonomy to the artist, leaving him free to express himself”.

As De Santis goes on to explain, “the idea of sharing, with a fully participatory citizenship, is the basis for the development of an innovative city; through constant discussion with the citizens themselves on certain issues.
I would like this to be understood”, he adds, “that this is not simply ‘a drawing on the wall’ but a real redevelopment project in some areas of the city: through this project we also want to show the suburban parts of the city, that the administration cares for them”. The framework of this participatory citizenship also includes the choice to collaborate mostly with young local artists in the development of urban art projects.
“I am pleased that the young people of Trieste are valued and feel as an active part of their  community,” tells the Councillor, highlighting how the intention is also to make them understand “that they can really be the change of their city.
The project, with its renowed parts, was presented by videoconference on Thursday, April 2nd during the Budget Committee, together with some news from the Department of Youth Policy for the period 2020-21.

“The basic idea”, the Councillor reported, explaining the new developments, “is not to reduce it to just a few sporadic interventions”.
It was in this spirit that a Street Art Festival in Trieste was to take place in mid-April – now postponed to a date to be set due to the epidemiological emergency from Covid-19 -involving many local artists.
This novelty would have been introduced to the comunity during a conference initially scheduled for the end of March – which in turn was cancelled due to the current emergency – which would have brought together in the capital many artists of the Triveneto area, all part of the Young Italian Artists circuit (GAi).
This meeting should have given rise to a moment of confrontation and reflection, “to understand the approach of the different administrations” explains De Santis, as well as “to share the good practices carried out by each of them in the field of urban art projects”.

With this appointment, Trieste would have been the driving force behind this initiative, precisely because, the councillor explains, “we don’t lack anything compared to the others, and therefore we must not have a passive role as a city”.
Another important novelty illustrated by the Councillor is the project that includes the realization of a huge mural on the “wall” of Viale Miramare 65, with the environment and the sea as main theme, to be realized with eco-compatible paintings. “Among the objectives,” explains De Santis regarding possible developments of the Chromopolis project, “there is also that of collaborating with the Ater.
We already have walls approved with the resolution of 2018 through which the available surfaces had been expanded.
The idea would therefore be to create two works on the buildings, after a discussion with the citizens who live there: a microcosm towards which the municipal administration wants to focus its attention.
The president of the Ater”, De Santis says, “has already supported the project and the possibility of using certain walls”.

Such initiatives, which would lead to a greater role of urban art in Trieste, could, perhaps, when the health emergency has “ended” and it will be time to start reinventing and reprogramming the future, give the city a partly new and renewed face.
Moreover, as the Councillor tells, the Chromopolis project itself could also represent a “tourist route”, which would allow visitors to be brought to those places of the city usually considered non-tourist areas.
Let’s disprove the myth that street art ‘dirties’ the city,” he concludes, “on the contrary, it is a true work of art.