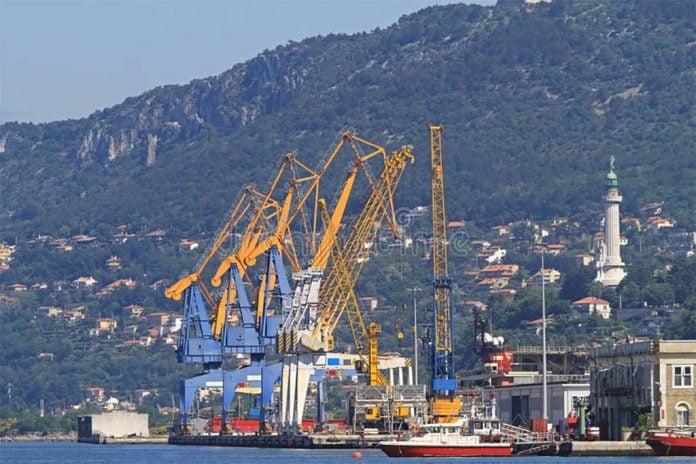 22.04.2020 – 10.32 – Trieste, the port, the shipping agencies. The sea is the city’s life; before the epidemic of Covid-19, in the second week of February 2020, the increase in maritime traffic had a record growth of 9%, following a 2019 that saw 62 million tons of transported goods and additional 4 million tons in the port of Monfalcone.
Thanks to these numbers Trieste is the most important port, in terms of shipped freight in Italy.
Then the blockade of production activities throughout Europe, and the quarantine.
We spoke about today’s situation and how to restart with Alessandro de Pol, general manager of AMTriestina transport ships and president of the Maritime Agents of Friuli Venezia Giulia.

President, what will happen when the emergency will be behind us and we have entered the so-called ‘Phase 2’?

“Nobody really knows what will happen. The situation is very complicated; my feeling, but I think also of any Italian citizen, is that we are in the hands of no one”.

Are there decisions missing, in your opinion?

“Politics is far away. I’m not referring to that of Friuli Venezia Giulia, which quickly did what it could; the regional government, with a large part of public opinion against it, in the end put in place a good plan and applied good deterrents that avoided even worse consequences on the health issue – and I’m thinking of Lombardy. But there is no plan for the immediate future. Until the end of March, maritime activity continued in a normal way and without any particular consequences: perhaps a few ships less, but nothing particular or worrying.
April, on the other hand, unfortunately, is beginning to be a difficult month: apart from the containers, which by type of traffic – usually based on longer journeys, even thirty days – are still holding up well, the rest of the shipments are beginning to feel the effects of the blockade”.

Today we see the first effects of something that started forty days ago?

“Exactly. The situation we are living today is the effect of measures taken in the first days of March.
On Mediterranean traffic – in Trieste, they affected mainly the ferry traffic to and from Turkey – there is already a drop of 40%. The traffic in the international port of Trieste does not have Italy as catchment area: we discount as problems those that Austria, Bavaria, Hungary may have.
Or the Czech Republic and Poland.
These are countries where activities are slowly starting up again. This might bode well, but one problem that should not be overlooked is that of consumption: producing and transporting is not enough. To pick up the pace, you need a market ready to buy, to consume”.

And what can you say about the most important raw material for energy production, namely oil?

“These days, it’s all over the newspapers, oil has even fallen to negative quotations, producers are paying the buyer rather than investing in deposits or stopping production itself: today we have several oil tankers, waiting for the situation to evolve, in the Adriatic. The refineries no longer have storage capacity.
Until fuel consumption resumes, there will be no way to transfer the ‘oil’ goods to another depot: storage is much more complex, understandably, than the rest. It is a curve made up of things that are slowly coming to a halt: it is commonly said that crises in ports come later, but also recovery, unfortunately, comes later. It also happened eleven years ago, after the collapse of 2008, and during previous crises. The Transalpine Pipeline, which completely supplies Austria, Bavaria and the Czech Republic, is, for example, something that lets us worry about May and the following summer months. Oil consumption has been reduced by eighty percent, diesel
consumption by fifty percent, and aviation fuel consumption by practically one hundred percent”.

Are there possibilities to mitigate the problems that are coming?

“Not many, considering the scale of what happened. But hopefully this crisis could teach us something.
There is not a single one, among maritime operators, who does not complain because of bureaucracy and the cumbersome way of carrying things out in “normal” times: the inadequacy of procedures has been complained about for decades, but nobody does anything: this is a government made up of committees and  technical commissions, with no clarity as to who is ultimately setting the rules. For years, we have been
asking the authorities to be able to carry out certain practices electronically: we already have the necessary technology at our disposal, but we were never given the opportunity to do so.
With the outbreak of the epidemic, however, the situation was automatically unblocked: the fear brought about by the health emergency made the very tools we had been asking to use for some time immediately valid and usable.

Why wasn’t this done before?

“I can give an opinion: today it is done as, and perhaps even better than before, via an IT platform, that at some degree takes away some power from the authorities. I hope that, after the emergency, it won’t go back to the way it was before. Bureaucracy in Italy, unfortunately, has become self-referential and allows many people to maintain privileged positions: just see the decrees written these days, they are far from comprehensible”.

Is there a lack of legislative bases to be more efficient in the maritime traffic sector?

“From a legislative point of view, there is a lot to do in our sector. I realize that in a private company or structure one is very agile, while in the public sector and in environments such as the port authorities, customs or the Guardia di Finanza (financial police), it is different, and a lot depends on ministerial provisions that cannot be derogated locally. The change must therefore start from Rome. Otherwise, there will remain constraints, burdens and costs of which there is no need”.

Where to start then?

“I believe we should start with the widespread introduction of computerized procedures, and an effective implementation of a single telematic counter for customs practices. It already exists on paper: it has never really worked. And, of course the unification of the computer platforms: each authority involved has its own, which very often does not dialogue with the others. And the result is that everything stops, even if there are no particular technical problems or if they could be easily solved. And we are not getting out of it: for a single ship arrival, it is necessary for us to work on four different computer platforms. We are used to it, but in this particular situation you realize that you die of bureaucracy, and that you can easily do well without it.
Technology would make it possible to do things well that are not made available to those who should have access to them, because there is no legislative and organizational basis that allows it”.

Will Trieste have difficulties in recovering after the Coronavirus?

“Trieste has bet everything or almost everything on tourism: an absolutely correct thing. However, today we can see how tourism can be forced to stop due to external, unpredictable factors: and as a city we have clearly neglected the industrial sector. The port of Trieste has evolved, compared to other ports, in a remarkable way, and we have seen how it has been possible to contain the loss on the traffic of containers and ferries, above all thanks to the fact that the goods are sorted by rail – the transport on road, in this period, is reduced to a minimum. As an international free trade-zone, Trieste could handle goods and industrial operations under extra-customs regime as it is a status recognized in Italy and internationally. Once again, however, the national government doesn’t allow us to do so: in theory it is granted, but how it should be done has not yet been clarified, despite the many requests made, it has not been defined who controls what and in fact there has been no progress in the last two years. Nothing is moving. And this would allow Trieste a real economic take-off, since the city will have to recover from the economic consequences of the epidemic.”

Why is everything still?

“It is an exquisitely political issue, which is not influenced by many other factors: in the declarations of the free trade-zones to the European Union, the Italian government has not highlighted Trieste, despite the fact that the EU is well aware of both the status of the city and its potential. The European Union knows very well how the free trade-port of Trieste should work, but if Rome does not accept this possibility, and does not make Trieste truly operational in turn, communicating it to the EU, the situation cannot move forward.
The initiatives taken two years ago, with the creation of FreeEste in the former Wärtsilä area, then came up against a lack of regulations and implementing provisions.
Finally, it was thought that it would be possible to grant the necessary permits; but at the moment everything is at a standstill”.

In a few days, Prime Minister Conte’s government will begin to ease the blockades on production and circulation; will this be enough to get things moving again?

“No. The commercial part, in the sense of a return to activities, will work, I’m not pessimistic about that. But reopening factories, productive and commercial activities without the free movement of people is certainly a first step, but not enough. It will not improve the situation that is being created in these weeks: we could find ourselves with many products ready and delivered and nobody who wants to buy them. When you have to make an effort to meet the cost of necessities and taxes, you do not think about buying and consuming. To this, at the end of the emergency, we will have to add a count that will be sad, and made up of who will have reopened, and who will not: because surely someone will not reopen, someone will not have the opportunity to do so. In short, health will be good, but not the rest: the system worked because there was consumption, if it does not return to those values, we will never have a full recovery. The sooner people can come back to life, the sooner the recovery can begin. Trieste could be a bit luckier than others precisely because the catchment area is the neighboring countries and central and Northern Europe”.

And what will happen to the traffic of goods with the East, precisely with China, the New Silk Road?

“I don’t think there will be any major impacts. In the end, the expectations generated by the signing of the Memorandum of Understanding with China have not been followed by real and consistent developments, there has been no sale of the port of Trieste to China, something that many were talking about, and for now nothing particular has happened. These fears, however, were groundless: the concession, as far as the port is concerned, is revocable, I have never seen the risk that there could be a ‘Chinese conquest‘, those were headlines and who wrote that we were selling Trieste didn’t think of the rather large and well positioned interports already owned by China for example in Germany. Trieste is a convenient entry point for goods from the Far East, Turkey and the Black Sea: for now, nothing more than a transit point, and this is the purpose of a port”

Patuanelli, Trieste is the “Main port for the use of the Recovery Plan”

The first photographs of Trieste: the lost daguerreotypes of C. Fontana

“Who knows?” Leiden, ESOF 2022 and the future of science. Interview with Michael Matlosz

What diseases are we predisposed to? Human Technopole studying Italians’ DNA