24.03.2020 – 16.00 – Yesterday there was some data on a possible slowdown in the Covid-19 epidemic, which is creating enormous health concerns and impacting equally strongly on the country’s economy, but it is still too early to predict how the situation will evolve.
We have asked Dr. Fulvio Zorzut, a medical epidemiologist specializing in hygiene and preventive medicine, to explain to us the situation in Trieste and more generally, and to express his opinion.

How would you define the situation on our territory? 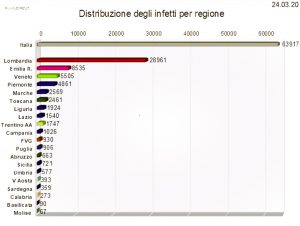 “We will talk about Trieste because it is our city and then about the whole region; if you allow me, I wanted to draw your attention for a moment to something that struck me, and that is the worldwide acceleration of cases. Basically, just since yesterday. Early this morning I had the opportunity to read the data on the Covid-19 published by the John Hopkins University, an absolutely reliable institution. There are over 381,000 cases in the world. But the important thing is not the number, but rather the fact that the figure is increasing by about a thousand cases per hour.

The pandemic has accelerated; this being said, there will be 400,000 cases at the end of the day, not next week, tomorrow morning another ten thousand more cases and so on. So, there is an acceleration in the spread of the infection, not a slowdown. And that’s the first thing to highlight”.

Is the situation in Italy equally worrying? 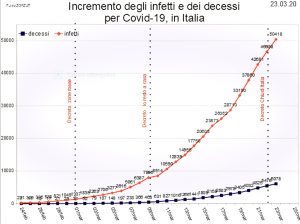 “At the national level, and therefore also at the regional level, the numbers continue to grow: today we are basically at the sixteenth day of quarantine. Yesterday the cases were 50,418, and the deaths were 6,078. These numbers are actually of little relevance – for the listener or for the specific context we are talking about, of course. But they do allow us to verify the fact that there is one thing to worry about, in China, the lethality rate was 3.4%. Our national data stands at 9.5% so, a notable difference: it was 7.1% three days ago.

I do not think that is because of a more aggressive mutation of the virus, that would be a hypothesis that opens up unexplored scenarios. I think that Italy, even if it has a very effective and efficient health system, is paying for a very high average age of the population, and the presence of multiple pathologies.
And the distribution of cases in deaths is clearly to the disadvantage of males, but this does not affect the overall number: among the deceased, 70% are men and 30% are women.
There are no precise answers as to why this is the case, we can only speculate”.

Can we already have a fairly precise picture of the distribution of cases? What are the critical issues in Friuli Venezia Giulia? 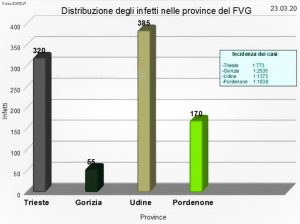 “It’s early, but we can discuss the situation. I made the analysis based on world data and then on national data because those of our region, fortunately show small numbers. Although there are over 900 cases, from a statistical point of view it is a limited sample, so it is difficult to establish a reliable trend.

Then, to answer your question, in our region and in Trieste in particular, it is the elderly population: Covid-19 is a disease that affects in 22% of cases the population over 90 years, in 19% the 80-80-year-olds and in 12% the 70-year-olds. Let us say that the vast majority of deaths occur from the age of 70 and over; in the population aged 0 to 29, there are a few cases at national level, but they are marginal. Of course, there are always a few young people, a few children, there is also a newborn baby, but they are obviously exceptional or particularly unfortunate situations. I underline this problem of age because in Trieste one of the main problems, which is difficult to solve, are the elderly guests in nursing homes. At ITIS, as you know, there have been cases, but also at the Gregoretti nursing home, in Casa Serena and Casa Bartoli.

The highest attention for Trieste and also for Friuli Venezia Giulia must be focused on these realities, there is actually a big outbreak also in the retirement home in Mortegliano at this moment.

Thankfully, in over 60-65 percent of cases the disease is trivial or you don’t even realize you have it; actually 7% of patients are asymptomatic. This is a significant fact because otherwise, unfortunately, we would not count the deaths”.

There is a lot of talk about the importance of taking asymptomatic people into account, as far as the model for analyzing the behaviorof the epidemic is concerned.

“It is important to do so. Both in Trieste and in Friuli Venezia Giulia, as on the whole national territory, if the Civil Protection says that there are 50 thousand positives, they are certainly underestimated by a factor of ten. There is no doubt that there are half a million if not more positives at Covid-19 right now. And in my opinion, there may be many more.

The fact that they are not counted is because these are pathologies that, in addition to overlapping with those of the common flu for which we are still in the seasonal queue, go unnoticed. Young people often don’t notice them, they don’t even go to the doctor, they don’t get counted, and they get out of any data collection“.